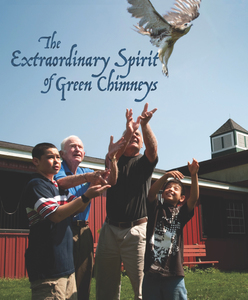 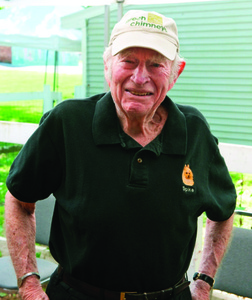 New York’s human services world has lost a truly unique educator and advocate for children and animals. Dr. Samuel B. Ross, Jr. died peacefully at the home of his son on February 28, at the age of 89. Known to many by his childhood nickname, “Rollo,” Dr. Ross leaves a remarkable imprint on the lives of hundreds of children and families. Ross was the founder of Green Chimneys, the nonprofit school and human services agency providing education, residential treatment, and animal-assisted and nature-based therapeutic programs for children with special needs. Inspired by his own boarding school experiences and a genuine devotion to animals, Ross established the Green Chimneys School for Little Folk in 1947 – at just 19 years old – on a small dairy farm in Brewster, New York.

Always ready to share a story, Ross frequently spoke of how he convinced his father, grandfather and uncle to purchase the Green Chimneys property. After several months of “lobbying” to contact a realtor to locate a farm, Ross knew he found the perfect place. Wary of the condition and the complexities of operating a school, his family demanded to know what Ross knew about running one; his reply: “I’ve been in school all my life!”  Many years later, Ross acknowledged it was not a good answer and joked, “But just as an only child knows how to do, I wore down their resistance.”

Ross is widely recognized as a leader and innovator in therapeutic education and treatment for children with social, emotional and behavioral challenges. From the start, his dream was to create an environment where children and animals could live together in a farm setting. The original “farm school” opened its doors with just 11 young students, with Ross leading a small staff to provide academics, recreation, and a loving environment for the children, with the unique experience of interacting with and caring for animals.

In the decades that followed, Ross developed Green Chimneys from a small private school into a renowned child care agency and special education school offering innovative education and therapeutic programs and services for children and adolescents. And the farm grew right along with the school, as children learned a great deal in the responsibilities of day-to-day life on a farm. His wife, Myra, was with him every step of the way, joining his vision upon their marriage in 1954. The Rosses also raised their three children at Green Chimneys; each one learning and working alongside the children enrolled.

By the mid-70s, a high proportion of Green Chimneys’ children were special needs students referred by the New York State school districts. A Residential Treatment Center was also created to care for emotionally disturbed and learning disabled children referred from social services departments and public schools around New York State. The Green Chimneys farm took on new importance as the student population evolved and animals increasingly took on the role of ‘therapist’. Animal-assisted activities became central to the Green Chimneys approach to early intervention for children with emotional and mental health issues. Around this time, the farm opened to the community-at-large and later added a renowned wildlife rescue and rehabilitation program. Green Chimneys has remained a popular public organization with diverse programs serving generations in the surrounding community.

Ross’ book “The Extraordinary Spirit of Green Chimneys: Connecting Children and Animals to Create Hope” is both a personal memoir and chronicle of how Green Chimneys came to be. An active Putnam County resident for decades, Dr. Ross also fulfilled roles in local politics and community affairs including two terms on the Board of Education for Brewster Central School District and as a board member of Putnam County Cooperative Extension. He was a devoted, long-time member of the Rotary Club of Brewster and a past District Governor of the organization’s District 7210. He, along with close friend Israel Mike Meyer, was also one of the founding families of Temple Beth Elohim in Brewster, NY.