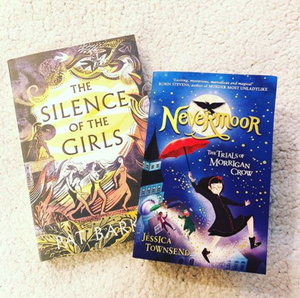 September was my most prodigious reading month so far in 2018: 10 books and two plays. It’s a bit much to recap in one place, so I though I’d highlight my seven favorites.

The Silence of the Girls” by Pat Barker

First lines: “Great Achilles. Brilliant Achilles, shining Achilles, godlike Achilles. . . How the epithets pile up. We never called him any of those things; we called him ‘the butcher.’”

Recently, someone retweeted a two-year-old tweet of mine in which I requested a novel version of “The Iliad” from Briseis’ point of view. I’ve no recollection of writing this tweet, but apparently the universe heard me. Barker’s novel tells in first person the story of The Iliad’s Briseis, who Greek forces capture when they raid and sack cities around Troy.

In “The Iliad,” the powers that be initially award Briseis to Achilles. But Agamemnon appropriates Briseis after he is forced to return his “prize,” Chryseis, a priestess of Apollo. Her father arrives at the Greek camp to request her release in exchange for considerable treasure, but Agamemnon initially refuses. Her father calls upon Apollo, god of the plague, to punish the Greeks. He obliges, and the Greeks pressure Agamemnon to return Chryseis. As leader of the Greek forces, Agamemnon decides he cannot be without a prize. Achilles, the Greeks’ most effective warrior, challenges Agamemnon’s authority. What better way for Agamemnon to put him in his place than by appropriating his prize? Insulted and furious, Achilles recalls his troops from battle. And the story goes from there.

Barker incorporates all of the above events in her novel and carries it forward beyond the events “The Iliad” covers. I found it riveting. On a whim, I picked the book up off my shelf and read the first line ... then stayed up until 4:30 a.m. to finish it. She portrays ancient Greece in all its brutality and paradox. It can be difficult to read (the plague scenes are not for the squeamish). But it made me think and feel, and the writing is intense.

This book pairs well with, obviously, “The Iliad” (Stephen Mitchell’s translation is stunning) and Euripides’ “Trojan Women” (I love Emily Wilson’s translation, which appears in “The Greek Plays”).

”The Bookshop on the Corner” by Jenny Colgan

First line: “The problem with good things that happen is that very often they disguise themselves as awful things.”

Ugh, I absolutely adored this book about a woman who converts a van into a mobile bookshop in Scotland. The main character felt deeply relatable as a book lover who sometimes has to remember to put down her book and live her life. It made me long to open a bookshop and move to Scotland. I certainly have the inventory for it. I don’t think my family would go for it, though.

“Why Homer Matters” by Adam Nicolson

First lines: “There is a pair of linked questions at the heart of this book: Where does Homer come from? And why does Homer matter? These ancient poems can be daunting and difficult, but I have no doubt that their account of war and suffering can still speak to us of the role of destiny in life, of cruelty, humanity, it’s faulty and the pains of existence.”

I have such respect and admiration for this meditative book. It incorporates history, literary analysis, cultural analysis, memoir. Nicolson focuses most heavily on “The Iliad” and the Homeric world’s warrior culture. He looks at contemporaneous stories from other cultures, showing how the story might read from alternate perspectives of the same period. He touches on what can and cannot be known about Homer. He explores the oral tradition and its implications for the relationship between myth and history. For such a short book, the reader comes away with quite a lot.

It’s also clear he is approaching Homer from a specific perspective, and I appreciate that clarity. Although I do love “The Iliad,” I’m currently more focused on “The Odyssey”—especially with how Homer frames the relationships between men and women. Nicolson deals with this aspect of Homer fairly briefly, though compellingly, but his book overall gave me so much to think about and so much context and information. I highly recommend it even if you’re not (like me) obsessed with Homer.

“The Trials of Morrigan Crow (Nevermoor #1) by Jessica Townsend

First lines: “The journalists arrived before the coffin did. They gathered at the gate overnight and by dawn they were a crowd. By nine o’clock they were a swarm.”

How metaphoric is that first line, eh? I found this book a pure delight. Morrigan Crow is a cursed child destined to die on her 11th birthday. But when the time comes, a fellow called Jupiter North whisks her away to a secret world called Nevermoor, where Morrigan is given the opportunity to join a secret society. First, though, she must make it through the trials.

I’ve heard this book compared to Harry Potter, and I can see why. It’s whimsical and imaginative. A chapter on Christmas as it is celebrated in Nevermoor is a hoot with a purpose. There will, from what I’ve heard, be nine books in the series. I’m looking forward to seeing where Morrigan’s story goes.

First lines: “This book was conceived when I asked myself what women were doing while men were active in all the areas traditionally emphasized by classical scholars.”

This is a classic feminist history of women in antiquity, originally published in 1975. Academic writing can be hit or miss for people who actually want to enjoy reading history (ha). Pomeroy is a “hit” for me. Her writing is fluid, elegant, and compelling. Some of her findings may be outdated at this point, but her work was groundbreaking for its time, and I wanted the context.

Gratuitous personal aside: I love her analysis of Euripides.

First lines (Antigone speaking): “Ismene, my sister, my own dear sister, / what evil left behind by Oedipus / will Zeus not bring to pass while we still live? / There is nothing painful—no disaster, no shame, no dishonor—that I do not see / among the troubles that beset us now.”

It has been years since I read this play. I was reminded all over again why it is so often included on college syllabi. The play follows the conflict between Creon, king of Thebes, and his niece Antigone (Oedipus’ daughter) after a civil war in which her brothers fought on opposite sides, one with and one against Creon. Creon decrees that the second brother must be left unburied. Antigone defies him. It’s classic Greek tragedy, which really just means it shows us how we can never seem to get out of our way, not matter what the time and place.

First line: “Hamish Macbeth awoke to another day. His dog, Towser, was lying across his feet, snoring rhythmically. Sunlight slanted through the gap in the curtains. The telephone in the police office part of the house shrilled and then the answering machine clicked on.”

Ah, this cozy mystery series set in the Scottish Highlights is delightful. You don’t have to read the books in order, but I’m doing so to make sure I don’t miss any. In this installment, Hamish takes a vacation and ends up investigating a murder. Obviously.

What were the best books you read this month? What are you looking forward to reading for the rest of 2018?