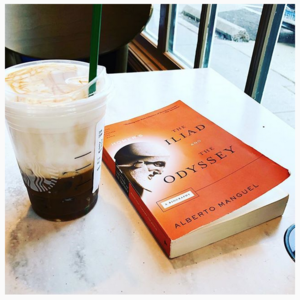 Have you ever seen one of those videos where a person is juggling flaming torches, while riding a unicycle, backwards, and it’s a race? That’s a bit what it was like inside my brain in the month of April. I was all over the place, genre-wise.

I picked up this fantasy/adventure novel, the first in a series, on a whim in (what else?) a Nook book sale. It follows Irene, who is a Librarian for The Library. Sound mysterious? It is. As far as I can tell from this first outing, the Library exist in the space between alternate realities. It seeks to collect all editions of all books ever written, and its Librarians undertake search and seize missions to recover these editions. As you can imagine, this can be dangerous work because books can be dangerous.

If you enjoy light fantasy, books about books, and are looking for a fun and funny romp, I recommend giving this a go.

The History of the Kings of Britain by Geoffrey of Monmouth, translated by Lewis Thorpe

Geoffrey’s book, originally composed in Latin in the early 12th century and a primary source for King Arthur literature, purports to be a history of Britain’s king from 1200 BC to approximately the 8th century AD. But it’s mostly myth and fiction. The year 1200 BC is significant because Geoffrey’s assertion is that Britain’s first king, Brutus, was a great-grandson of Aeneas, the mythic Trojan royal who survived the sack of Troy and went on to found Rome. The book ends in 768, the year Charlemagne was crowned king of the Franks; in 800, he became the first Holy Roman Emperor. See what Geoffrey did there?

Admittedly, this is the only translation I’ve read, but it made for fun and accessible reading.

City of Bones (The Mortal Instruments #1) by Cassandra Clare

This is the first in a wildly popular YA fantasy series about a girl who discovers she has hidden powers, namely to fight evil (what else would she be fighting?). It was fine, I guess.

Homer’s the Iliad and the Odyssey: A Biography by Alberto Manguel

Did a flesh and blood rhapsode called Homer exist, or was he a concept? If he did exist, did he compose the poems we now know as The Iliad and The Odyssey, or either of the poems, or none of the poems? We’ll never know, but we’ll probably never stop arguing about it because it’s just too fascinating. Meantime, here is a bio of the poems themselves—their transmission across the millennia and their reception, adaptation, and translation. The book's emphasis is on Western reception, with one chapter on the Islamic scholars and a few mentions of the Eastern Roman Empire. In other words: the book's scope is fairly limited, perhaps understandable given the its length and audience but still. It's limited.

Greek to Me: Adventures of the Comma Queen by Mary Norris

I was bound to love this because I love when people love my culture. Do we have all our “love” sorted? Good. This is a memoir in which Norris recounts her deep dive into learning ancient and modern Greek and her travels to Greece, while also reflecting on her life at large. Her wit and earnestness make this an enjoyable, if brief, read.

A Discovery of Witches (All Souls Trilogy #1) by Deborah Harkness

Here is another popular book in a popular series about which I have an unpopular opinion: Eh, it was okay. Actually, I found it dragged interminably, and I still don’t quite understand why I didn’t DNF it. The story is about a witch who tries to deny her formidable powers and live like a "normal" person, but this becomes increasingly impossible. Also there are vampires and daemons. I guess if you like witch and vampire-based fantasy, you might enjoy this?

Opposite of Always by Justin A. Reynolds

This is a young adult time loop novel in which Jack falls in love at first-ish sight with Kate, watches her die, and then is immediately sent back the moment of their first meeting. I enjoyed the narrative voice and found the characters sufficiently endearing to keep me invested in their story. That said, I should tell you frankly that I love time loop literature so much that I openly recuse myself from judging books in this genre. I knew when I picked it up that I would enjoy it because I love seeing how one small difference can change an outcome. It is most instructive!

A Study in Scarlet by Arthur Conan Doyle

Can you believe this was my first time reading Arthur Conan Doyle? I’ve never been much for investigative procedurals, but I can see why this series is popular. The book was cleverly paced and the characters as delightful as advertised.

It is not possible to overemphasize how fabulous these hymns are, with thanks to Cashford’s translation. They’re called Homeric because they are composed in hexameter (same as Homeric verse), but their dating is all over antiquity. Each of the hymns is addressed to a particular god or goddess. If you’re into ancient Greek mythology—and really, why wouldn’t you be—these are a treat.

My two favorites are the Hymn to Athena and the Hymn to Hermes. The former because Athena leaps out of Zeus’ head shaking her spear, which is both ridiculous and fabulous. (Seriously, picture it.) The Hymn to Hermes is hilarious, intentionally: At 12 or so hours old, Hermes goes out to steal Apollo’s cattle, successfully. He then skulks back home, tucks himself into his cradle, and attempts to act like an innocent newborn, but his mother isn’t fooled. She gives him a telling-off such as you might hear from a Greek mother in any age, including our own (as I know all too well).

A Monster Calls by Patrick Ness

This middle-grade book is about a young boy struggling to cope with his mother’s illness. He has nightmares about a monster, and then one shows up in his bedroom. Friends, I encourage you to read this, but know that if you have a tender heart you will weep.

How was your April in books? Anything to recommend?