Auditions for A Love Fest of One-Act Comedies 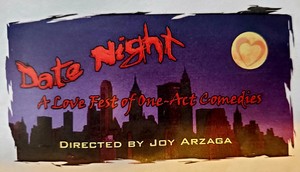 AUDITIONS ARMONK PLAYERS DATE NIGHT: A Love Fest of One-Act Comedies is a compilation of one-act romantic comedies that each share the common subject of dating and relationships.

NO PREPARATION NECESSARY. Will ask to read from the script and bring on your A game!

Below is a list of the one-acts and a brief description.  (Copies of scripts are available)

Sure Thing by David Ives featuring a chance meeting of two characters, Betty and Bill, whose conversation is continually reset by the use of a ringing bell, starting over when one of them responds negatively to the other.  [1 male/1 female. 18+ years old]

English Made Simple by David Ives is the story of a couple named Jack and Jill who meet at a party. As the night progresses, it becomes apparent that the two knew each other, and were even involved romantically, before this night at the party. Meanwhile, a college English professor, whose name is never announced but written as the "Loudspeaker Voice" in the script, explains what the couple is really thinking as they talk to each other.  [1 male/1 female 25+ years old] Plus 1 male or 1 female for the English professor 40+ years old].

National Love Championship by Joy Arzaga.  A TV game show hosted by two sports-like commentators where the two contestants, Karen and Vito compete for the trophy of irresistibility by Karen having to resist Vito’s charms and Vito having to win Karen’s affection. Will Karen keep saying “No!”? Will Vito pull out all his game playing charms to get Karen to say “Yes” ? Tune in to this finale episode to find out! (There is a commercial within the tv show that will be filmed. It is a spoof of the old Summer’s Eve commercials with mother & daughter).

Check Please by Jonathan Rand.  Dating can be hard. Especially when your date happens to be a raging kleptomaniac, or your grandmother's bridge partner, or a mime. Check Please follows a series of blind dinner dates that couldn't get any worse -- until they do. Could there possibly be a light at the end of the tunnel?

A Chance Meeting by Frederick Stroppel.  A man and a woman in a lounge glance, nod and speak in this bewitchingly comic piece. They have nothing in common but are attracted to each other. When another man enters and calls the first by a different name, he explains that the woman is really his wife and the pretense is merely to add spice to their marriage. The fur flies when the woman makes a pitch for the second man.

Please note: HamletHub published information on neighboring towns in our Neighbors section to keep our readers informed of newsworthy items that may be of interest to those readers.