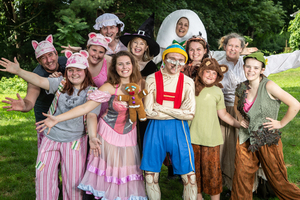 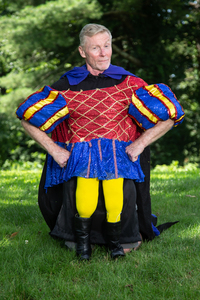 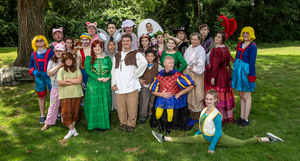 Musicals at Richter (MAR), celebrating 35 seasons as the longest-running outdoor theater in Connecticut, continues its main stage season with “Shrek the Musical,” a hilarious fairy tale adventure based on the beloved animated film and children’s book, playing July 26 to August 10. Staged on the grounds of the Richter House Arts Center, 100 Aunt Hack Road, in Danbury, performances take place outdoors under the stars Friday through Sunday evenings, with additional specially discounted performances on Thursday August 1 and 8.

Based on the 1990 children’s book and 2001 Oscar-winning Dreamworks Animation film of the same name, “Shrek”is a fast-paced, entertaining show, featuring a tuneful score by Jeanine Tesori (“Fun Home,” “Thoroughly Modern Millie,” “Caroline, or Change”) and sparkling lyrics and witty book by David Lindsay-Abaire. “Shrek”brings all the beloved characters from the film to life on stage, following the tale of an unlikely hero, a green ogre named Shrek, who finds himself on a life-changing journey alongside a wisecracking Donkey and a feisty princess who resists her rescue. Throw in a short-tempered bad guy, a cookie with an attitude and over a dozen other fairy tale misfits, and you've got the kind of mess that calls for a real hero - and his name is Shrek!

“Shrek” is directed for Musicals at Richter by Broadway and national tour veteran Lindsay O’Neil. Says Ms. O’Neil, “Directing ‘Shrek the Musical’ at Musicals at Richter has been such an artistic joy. We have assembled a fabulously talented cast who have so fearlessly created these characters we know and love from the film. The music direction by Dan Koch is stellar. His attention to detail and musical integrity to the

score is quite impressive. Our choreography in expertly crafted by Lindsay Miller. She has incorporated numerous styles of dance that elevate the story we are telling.” Ms. O’Neil adds, “ ‘Shrek the Musical’ is truly a show for all ages. This musical comedy is a spectacle that takes our audiences on a journey of self-discovery, acceptance and hilarity.”

Roger Grace (Warren) plays Lord Farquaad, the diminutive and ruthless ruler of the Kingdom of Duloc, and Fiona Bryson (Shelton) portrays the imposing and flirtatious Dragon. Both actors are making their Richter debut.

Heading up the group of Fairy Tale creatures displaced from their homes by the evil Lord Farquaad is Weston Pytel (Meriden) as Pinocchio. He is joined by Daisy Stott (Brookfield) in the dual roles of the Sugar Plum Fairy and Gingy; Kevin and Carolyn McCarthy (Brewster) as the Big Bad Wolf and Wicked Witch, respectively; Denise Milmerstadt (Carmel, NY) as Humpty Dumpty; Emma Lubbers (Mahopac, NY) as Peter Pan, Sydney Gershon (Brewster, NY) as Ugly Duckling and Ella Zamek (Wingdale, NY) as Elf.

Lindsay O’ Neil is making her Musicals at Richter directorial debut. Lindsay is a professional actor whose Broadway and National Tour credits include: “A Christmas Story, The Musical,” “ThePhantom of the Opera” and “Cats.”Off Broadway and New York City credits include: “I Married An Angel,” “The Most Happy Fella,” “Little Me,” “Gentlemen Prefer Blondes”(all at New York City Center Encores!), “Carousel”(New York Philharmonic), “W.S. Gilbert and the Broadway He Inspired” (Lyrics and Lyricists), “Babes In Toyland”(Avery Fisher Hall), “A Prairie Home Companion with Garrison Keillor”(Town Hall). Regionally, Lindsay has performed leading roles at Goodspeed Opera House, Barrington Stage, Flat Rock

Playhouse, Ogunquit Playhouse and more. In addition to performing, Lindsay has a private voice studio and will be joining the voice faculty at Marist College this August. Lindsay holds a Master’s and Bachelor’s degree in vocal performance from Manhattan School of Music and Eastman School of Music respectively.

Handling music directing duties for “Shrek” is veteran music director, educator and accomplished composer Daniel Michael Koch (Millbrook, NY). Koch was music director for last season’s “Annie” and for “Into the Woods” in 2017. Koch is the composer of “Let The Light Shine: A Nativity Song Cycle,” which premiered in 2016 and will be presented for a third year at Lyall Memorial Federated Church in Millbrook, NY.

MAR alumna Lindsay Miller (NY) returns as choreographer for “Shrek.” Her performing credits at MAR include “Carousel,” “Sweeney Todd,” “Nunsense,” “Brigadoon,” “Some Enchanted Evening” and “Sweet Charity.” She has an extensive background in dance with several years of training, performing, and competing in ballet, tap, jazz, modern, and more recently, ballroom and Latin. She has previously taught classes at Betty Jean’s Dance Studio and Dance Expression of Dutchess and Westchester.

“Shrek the Musical” is presented through special arrangement with Music Theatre International (MTI).

For tickets and further information, visit the website at www.musicalsatrichter.org, leave a message at 203-748-6873 or e-mail  This email address is being protected from spambots. You need JavaScript enabled to view it. .