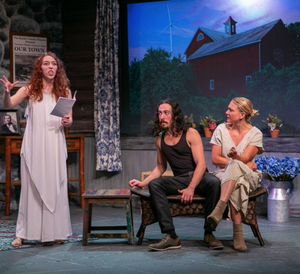 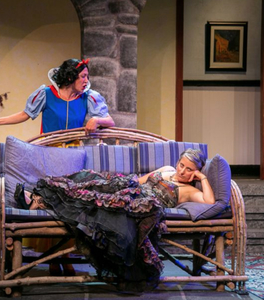 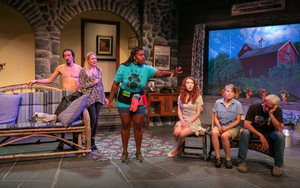 No time to get to the lake house this summer? No lake house to get to? Beat the heat and nestle into the comfy Buck’s County bungalow at TheatreWorks New Milford’s pleasant presentation of Christopher Durang’s 2013 Tony award winning play, Vanya and Sonya and Masha and Spike.

With a title that is mixed with the gravitas of Anton Chekhov’s heaviest of hitters in a flow that reeks of the hijinks of Bob and Carol and Ted and Alice, Vanya and Sonia and Masha and Spike settles comfortably in the middle: top-loaded with pretentiousness and erudition, but delivered by wacked-out pedestrians that stop just shy of the absurdity that is usually classic Durang.

The plot centers around the titular adult siblings Vanya (David Fritsch) and adopted Sonia (Lana Peck) and the disruption of their daily humdrum inertia by their famous actress sister Masha (Alison Bernhardt), who brings her current boy-toy Spike (Nick Raines) and a suitcase full of manufactured drama to the family’s bucolic Pennsylvania home in the midst of August. While the siblings do hearken to their theatrical upbringing (posters of past productions featuring their late parents adorn the walls), one need not be a Chekhovian scholar to recognize that Durang put Chekhov’s scenes and characters “into a blender,” and let the foam settle in a quaffable concoction. Durang does lean on Chekhov’s mastery of mood, and the plot functions as a vehicle to highlight the ebbs and flows of the characters’ emotional makeup rather than move action forward. Each player--including the remaining two characters: the randomly magical Cassandra (Sumiah Gay) and cloyingly ingenuous Nina (Maya Jennings Daley)--gets their moment of monologue and motivation.

While past Christopher Durang works sting of black comedy and acerbic wit (Baby with the Bathwater, Beyond Therapy, The Marriage of Bette and Boo, Sister Mary Ignatius Explains It All for You), this play feels written for an audience averse to discomfort. There are no awkward comedic moments over issues of child abuse, rape, or mental illness as in previous pieces, rather, the characters occasionally loft tiny reaction grenades (Vanya’s homosexuality, adopted Sonia’s romantic love for her non-biological brother) that land quietly and dissipate. The two hours are instead spent navigating character studies of some of the best “worst people.”

Durang serves up many scenes featuring what could be actual people with actual problems, and they are deliberately shmacted (overacted) all the way through. An exchange between Sonia and Masha dealing with their parents’ illness and death becomes a melodramatic “I can top that” crocodile-tear fest. The actors act to each other, if not always with, as the characters are, even as they exclaim otherwise, self-absorbed and myopic.

Peck’s usually unbearably woeful Sonia has her best moments when she’s reacting to people who aren’t there, and her phone conversation to a potential suitor is beautiful. Her connections with her fellow actors in much of the play are so disjointed, a choice for the character’s mental state, that this interlude is a refreshing balm; Peck’s delivery is natural and sincere. As a bonus, her Maggie-Smith-as-Evil-Queen impression is impeccable and so much fun to watch. Bernhardt, as the “famous actress” Masha comes on like a rocket as the role welcomes her to use every acting muscle to reach over the top and through the roof. As dramatic and ridiculously as she is written, she makes every scene kinetic and interest piquing.

Second to this is Gay’s Cassandra, who has to pass off sooth-saying and prophesying as profound and organic without being hokey. Her extra-cute t-shirts (all of which I want, as well as Vanya’s science tee) make the transformation that much more difficult. Cassandra at times comes across as drama-student-rehearsing-Greek-tragedy (which Gay actually is), but Gay handles the modern psychic vibe predominantly well, and one looks forward to the next display of nonsensery she will bestow on the action. Jennings Daley’s Nina also serves as a foil to the superficiality of the title characters, floating in as a coach to Vanya, an ally to Sonia, a fan of Masha, and an admirer of Spike. Daley gets to flex her literal acting chops when performing Vanya’s play wherein she must attempt to portray a less-experienced actress while being a solid performer in her own right.

The men of this production are perhaps the most derivative from the source, as they take two characters where sexual tension and emotional thrill were written solidly, and wash them each with calmness and Zen. Fritsch’s Vanya, even when unleashing his signature monolithic comedic/dramatic monologue, conveys an even-keeled focus that is infused with mellowness (maybe it’s the ponytail? No. He is chill through and through, even as Doc the Dwarf.). Raines performs the usually conceited and meat-headed Spike through his yogic filter and up-dogs his way through each scene with an almost clueless mindfulness (if that is possible). His “striptease” is less for titillation and more to feel at one with the world around him. The actors’ peaceful demeanors makes it difficult to see the angst and bravado of Vanya and Spike respectively, and these guys remain balanced no matter what heights or depths their characters hit.

Director Jocelyn Beard crafts this plummy production of Durang’s least-Durangesque play, complemented by the superb scenic design by Shagbargh Scenic, with special attention to the perfect painting by Leif Smith and Kate Moncuse--they are your go-to for stone work illusion. Featuring in this show are some specific costume requirements (or lack thereof), and costume designer Sue Haneman hits the marks perfectly. With dreamy lighting design by Peter Petrino, the audience is transported into the days and nights of a family in mock-crisis, highlighted by a too gorgeous view of a Pennsylvania barn--including fascinating views of the cosmos--which no one in the cast indicates. This may be the most preposterous thing about a show focused on Snow White costumes, diatribes, and unprovoked pottery smashing. There is a stunning view of this picture window throughout the entire show, and, aside from indicating time of day, it only functions as a brief in-joke with the audience in the penultimate moment of the play, with no pay-off as the moment is resolved for the characters in the final lovely tableau.

As indicative of opening night, there were uneven moments of lines being dropped, awkward improvisation, and lagging rhythm, but that being said, this offering was so enjoyable. If there was any bit that was far-fetched, the action always brought something new in the next beat to hold interest. There is a reason that community theaters and regional productions alike insist on doing this play: the characters are far too varied and irresistible and because of their distinct coloration on paper, there is not a dull light in the candelabra. Each has a moment or for just sparkle and shine and burst. Catch this light before it sets this summer.