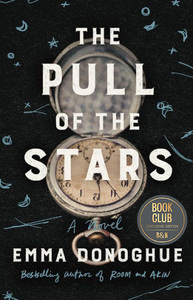 Readers Invited to Free Virtual Book Club Event featuring Emma Donoghue on Tuesday, September 8
Barnes & Noble, Inc., the world’s largest retail bookseller, today announced The Pull of the Stars by Emma Donoghue as the August 2020 selection for the Barnes & Noble Book Club, a monthly book club designed for readers across the country to discuss the most compelling books. Barnes & Noble is selling a special, exclusive Book Club edition of The Pull of the Stars as well as hosting a free LIVE virtual event on B&N’s Facebook Page with Emma Donoghue on Tuesday, September 8, at 7pm East Coast Time. Customers can purchase the exclusive edition in-stores or online at BN.com.

“The Pull of the Stars is an unexpectedly timely novel bringing readers to the maternity ward of a Dublin hospital during the height of the 1918 Spanish Influenza pandemic,” said Jackie De Leo, Vice President, Bookstore, Barnes & Noble. “It is a story of war, death, birth, family traumas and independence that will leave our Book Club readers wanting to talk about it. We hope everyone is able to join us for the virtual event in September to discuss.”

While Barnes & Noble can’t hold its usual monthly Book Club meetup in stores for readers to discuss the book, the bookseller is encouraging customers to engage with this important and gripping novel on social media and join the new B&N Book Club Facebook Group, as well as through a special virtual Book Club event a month after publication.

“I am delighted for The Pull of the Stars to be selected as the August pick for the Barnes & Noble Book Club,” said Emma Donoghue. “I hope everyone is able to join me for the virtual event on September 8.

The virtual event on September 8 will be hosted on Barnes & Noble’s Facebook Page. Before the virtual event, customers can also join in discussion at their convenience in the new B&N Book Club Facebook group and on social media via the hashtag #BNBookClub.

Previous Barnes & Noble Book Club selections have included: The Female Persuasion by Meg Wolitzer, An Absolutely Remarkable Thing by Hank Green, The Last Romantics by Tara Conklin, The Island of Sea Women by Lisa See, Lost Roses by Martha Hall Kelly, Mrs. Everything by Jennifer Weiner, The Nickel Boys by Colson Whitehead, Inland by Téa Obreht, The Testaments by Margaret Atwood, Dear Edward by Ann Napolitano and The Vanishing Half, by Brit Bennett.