Details
Published on Wednesday, 18 November 2020 12:22
Written by Master It Media/Amazon 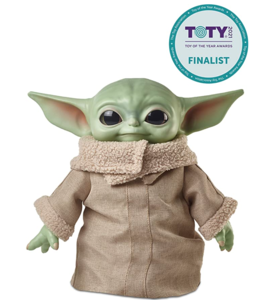 Last year, shoppers were eagerly searching for "The Mandalorian" merchandise especially of the adorable character "The Child" affectionately named Baby Yoda by adoring fans. There was not much to be had last holiday season because the creators wanted to keep the character underwraps and reveal The Child on the show not on the toy shelves.

For those of you who don't know, "The Mandalorian" is a popular Disney+ streaming television series created by Jon Favreau. It premiered with the service's launch in November 2019, and is the first live-action series in the Star Wars franchise. Their second season just launched on October 30, 3030.

This year fans are ecstatic with the choices available and are topping the charts of best selling toys lists.

Here are a few of the fan favorites:

Mattel Star Wars The Child Plush Toy  from The Mandalorian

According to a recent Google study, "almost 75% of U.S. shoppers who plan to shop this season said they will shop online more for the holidays than they did in previous seasons." That being said, shopping online early is the way to go this year.

The publisher earns affiliate commissions from Amazon for qualifying purchases. The opinions expressed about the independently selected products mentioned in this content are those of the publisher, not Amazon.

We are participants in the Amazon Services LLC Associates Program, an affiliate advertising program designed to provide a means for us to earn fees by linking to Amazon.com and affiliated sites. As an Amazon Associate we earn from qualifying purchases.