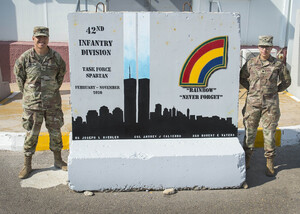 One hundred and fifty New York Army National Guard Soldiers who deployed to the Middle East in March are returning to New York after outprocessing at Fort Hood, Texas.

The Soldiers departed Fort Hood this morning and will arrive back at airports across New York this afternoon and evening. They spent two weeks in quarantine at Fort Hood to prevent the spread of the COVID-19 virus and complete demobilization.

Sixty Soldiers are flying back to New York City, forty are heading for Albany, and the rest are going to Buffalo, Rochester and Syracuse. The Soldiers are traveling as individuals, a process known as "single ticket," and return on different flights and will arrive at different times to be met by family members.

The Soldiers took COVID-19 tests before leaving Fort Hood. They will quarantine for three days and get COVID-19 tests to comply with New York's pandemic travel regulations.

The troops are the first of 670 members of the 42nd Infantry Division headquarters who have been serving in the Middle East in support of the Army's Operation Spartan Shield.

The division, headquartered in Troy, New York provided the command structure for the 10,000 men and women of Task Force Spartan; the U.S. Army forces serving in the region under the control of United States Central Command.

The 42nd Division formally turns over responsibility for task force command to the 36th Infantry Division of the Texas Army National Guard on November 19.

The Soldiers are departing the Middle East and traveling to Fort Hood and then returning to New York. Unfortunately the majority of the Soldiers are not expected to be home before Thanksgiving.

Another 140 Soldiers arrived at Fort Hood on Nov. 13 to begin the outprocessing and quarantine process. The remainder of the troops will leave Kuwait at the end of the week. It is expected that all the Soldiers will be home in New York in early December.

Soldiers who test positive for COVID-19 will remain at Fort Hood until they are no longer infectious.

Maj. Gen. Steven Ferrari, the division commander, credited the support of family and friends back home for playing an important role in the success of his Soldiers.

"Without your support and sacrifices, Soldiers would not be able to conduct their assigned responsibilities and stay focused on the mission at hand. Your overwhelming generosity and support was unbelievable," Ferrari said.

"Looking back at the division's deployment it's been a challenging and rewarding experience to be here during this historic period supporting the U.S.

Along with overseeing combat operations, the division headquarters served as the Central Command's primary focus for preventing COVID-19 from degrading Soldier readiness.

"Two weeks after arriving in theater the global pandemic hit us and our division became the Joint Operations Information Center for everything related to COVID-19 in eight different countries across the Middle East," said 42nd Infantry Division Command Sgt. Maj. Corey Cush.

The headquarters Soldiers set up a COVID-19 emergency response cell that provided information about the pandemic and medical responses to U.S. forces across the region.

"This is something we never trained for but each and every Soldier took ownership of this mission and performed magnificently," Cush added.

The division also oversaw numerous training exercises with partner and host nation militaries as part of the effort to deter regional aggression and strengthen relationships.

Training exercises between countries varied from testing command-post capabilities to side-by-side maneuvers. During one of these exercises, the 42nd Infantry Division deployed its mobile command post from Kuwait to Jordan within a few hours.

"What made this mission great were simply the people; the people we met and the relationships built will never be forgotten," Ferrari said.