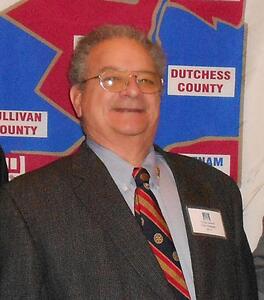 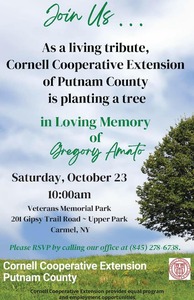 Gregory Amato was a Mahopac resident who was extremely active in local and county civic organizations for more then 50 years who passed away in April of 2020 at age 77.

As a living tribute, Cornell Cooperative Extension of Putnam County is planting a tree in Loving Memory of Gregory Amato on Saturday, October 23, 2021 at 10:00am in Veterans Memorial Park, 201 Gipsy Trail Road - Upper Park Carmel, NY.

Greg was born in NYC on September 29, 1942 to the late Natale and May (Gregory) Amato, moving to Mahopac with his beloved parents at the age of seven. He graduated from Mahopac High School in 1960.  Then, following in his father’s footsteps, he worked for the Coca-Cola Company in NYC. Not long after, Greg decided he preferred to spend his career helping his local community. He joined the Carmel Police Department in 1964 and held every rank from Patrolman to Chief before retiring in 1998 after 34 years of service. He married his loving wife Margery on December 27, 1980 in Carmel, NY. Together they were blessed with their daughter Laura.

Soon after retiring from the Carmel Police Department, he accepted a full time position with Guide Communications, publishers of The Guide phonebooks and Getting to Know magazines.  Greg loved that he was able to continue being part of the community by linking citizens to local businesses and services. During this time, he continued volunteering and dedicating his time and talents to helping the community through participation in numerous organizations. Greg was particularly proud of his involvement with the Lake Mahopac and Brewster Rotary clubs, Cornell Cooperative Extension of Putnam County and the Putnam County 4H Fair, where he was the esteemed leader of the DMPMs (Director of Motorized People Movers) for 18 years.  He also held positions in the Carmel Historical Society, Brewster Chamber of Commerce, Lake Mahopac United Methodist Church, Salvation Army, American Red Cross of Greater New York where he lead the Putnam County Disaster Action Team, United Way, and New York Federation of Police, among many other organizations.

Greg received numerous awards for his work in the community. Some of these include an award from NY VFW District 2 for outstanding contributions to the veterans in the community (1974), Grand Marshall of the Mahopac Italian American Club’s Columbus Day Parade (1984), first person to become an honorary member of the Mahopac-Carmel Chamber of Commerce (1998), Community Service Award from Lake Mahopac Rotary Club (2003), the Marian Iverson Citizenship Award from the Salvation Army (2005), Ruth Dain Voluntary Service Award (2008), the 4-H Fair was dedicated in his honor (2009), American Red Cross of Greater New York’s Award for Disaster Planning and Response (2009), Putnam County Historian’s History Publication Award for co-authoring the book Images of America – Mahopac (2014), and becoming an honorary member of the Brewster Rotary Club (2017). Greg was exceedingly proud of recently becoming a six time Paul Harris Fellow with Rotary International (2020).  He was recognized last spring with a proclamation from the Putnam County Legislature for his commitment to the county.