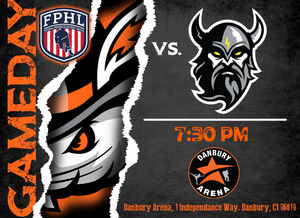 The Danbury Hat Tricks begin their quest for the 2023 Commissioners Cup with the Regular Season Opening against the Delaware Thunder. The puck drops at 7:30 PM.

This is the third Hat Tricks season in the Federal Prospects Hockey League. Last season, Danbury played 61 regular season games and finished with a 36-22-3 record, good for third in the FPHL. Danbury defeated the Binghamton Black Bears in the opening round of the playoffs two games to one but fell to the Columbus River Dragons in the semi-finals.

The FPHL's Forward of the Year in 2022, Jonny Ruiz, returns to wear the C for the Hat Tricks for the new season. In 59 games last season, the Williamstown, NJ native scored 49 goals and 36 assists for 85 points.

Billy McCreary returns behind the bench for the new season. The first coach in Hat Tricks history, who led Danbury to the 2020 Eastern Division Regular Season title, won the FPHL's Coach of the Year in the 2019-20 season.

Frankie McClendon (8-7) takes the spot in net and aims for another successful season as the Hat Tricks netminder.

The Delaware Thunder recorded a 9-42-2 record in the 2021-22 season. The Hat Tricks and Thunder met six times in the previous season with the Hat Tricks sweeping the season series.

All home games will be broadcast on the Danbury Hat Tricks' YouTube Channel. Chris Lynch and Jim Cerny will have the call from the Danbury Arena for the weekend series.