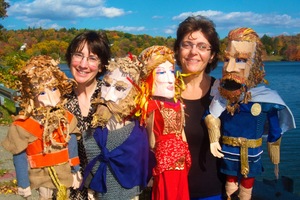 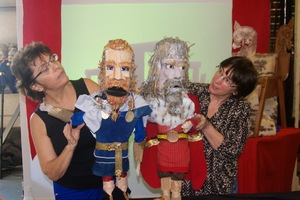 Hawk Rock Theater has been working at Arts on the Lake for more than a year to prepare their production of a renowned Anglo-Saxon era manuscript. The group will present their version of “Beowulf” at Art on the Lake, Lake Carmel Arts Center, 640 Route 52 in Carmel on Saturday, Nov. 5th at 3:00 p.m. and 7:30 p.m. and again on Sunday, Nov. 6th at 3:00 p.m.

Written by an unknown Anglo-Saxon poet, the ancient story, a venerable tale of one man’s struggle against the forces of evil, is set in Denmark and Geatland, the southern portion of today’s Sweden. It follows the exploits of the heroic Viking warrior, Beowulf, as he wages battle against frightening demons and a fire-breathing dragon. The epic poem was neglected until 1936 when J. R. R. Tolkein, then an Oxford scholar and author of  “The Hobbit” and “The Lord of the Rings,” published his “Beowulf: The Monsters and the Critics” thus bringing long overdue attention to the poetic masterpiece.

Directing her fourth theatrical production is teacher/artist Mary Schreiber. She and the 14 members of Hawk Rock Theater, a working blend of artists, actors, engineers, teachers and musicians, have been Sunday morning regulars at Arts on the Lake. There they have been handcrafting their props, puppets, masks and shields from an array of recycled materials to re-create for the stage an era dating back to 600 A.D. where Viking lords sat in the sanctuary of their mead halls and victorious warriors boasted of their heroic adventures.

Lisa Ameijide designed the puppets, inspired by the work of her father, the award winning artist Raymond Ameijide.

“I am just so proud of this cast who has given up so much of their time and made such a great effort to bring this marvelous old poem to life so everyone might enjoy it,” said Schreiber. “This really has become a labor of love for each and every one of them.”

Joining Schreiber from the onset was Kate Mackie, an English scholar who first read the historical text in its Old English when she was 19.

“I was amazed at what an astonishing poem it was,” Mackie said, “and I have loved it ever since.”

Schreiber called Mackie a wordsmith of no small talent as it was she who was instrumental in transcribing the poem, oftentimes tapping into other poets translations. It was she who configured the entire script that Schreiber said not only “preserved the beauty of the language and the gravitas of the poem,” but also made the narrative flow so as to be easily understood by a modern day audience.