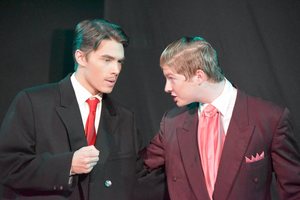 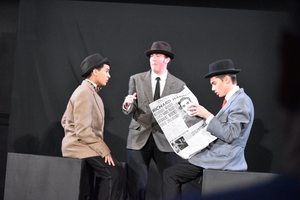 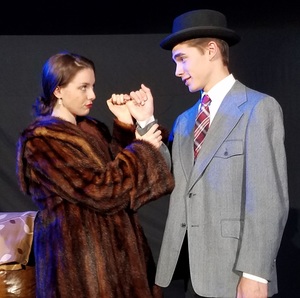 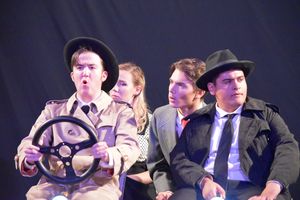 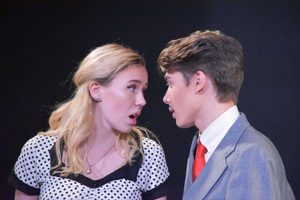 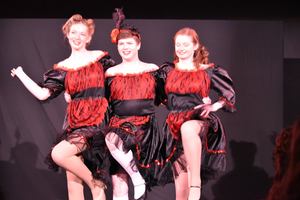 Carmel High School’s production of “The 39 Steps” shows what it truly means for a show to be an ensemble effort. With 25 actors playing over 125 roles, this 1930’s noir satire uses each character to it's fullest extent, with each character filling the space to create a truly dynamic group. Each member of the ensemble manages to stand out in their own right, from Annabella Schmidt (Olivia Hamilton) the mysterious and beautiful secret agent who sends Mr. Hannay to begin his quest, to the Heavies (Jovani Perez and James Purr) two goofy investigators who work for the enigmatic professor. Even the crew, lead by Stage Manager Cat Fox, was worked into the group, often making goofy poses reacting to the characters and setting as they shift the stage. This is the type of show that works simply because of the flow and comfortability each actor has onstage with each other. Anthony Velez (Salesman 1/Paperboy) said of his cast; “I feel like we’ve been a real, true, family. We came in here not knowing any of us, not knowing how our acting was gonna be...and we all became a family, we all connected, and it was a great experience.” And it is easy to see that relationship watching this show.

Another part of this show that made it so wonderful was the use of the entire theater. Cast members used not only the stage, but could often be found down the aisles, asking audience members if they have seen the local criminal escapees, or combing the crowds in search of missing cast members. This immersed patrons in each action that the characters took, as you weren't just watching actors on a stage, you were among them, very often tracking the different characters as they stalked through the audience on their separate quests. Student directors Deanna Prekpalaj and Andriy Gura worked under the guidance of director and producer, Margaret Carey. Ms. Prekpalaj stated, “The show was really good! And Liam was the star of the show.” Liam (Tuffy) of course being the bagpiping, Scottish dancer who appeared in multiple scenes. And proved how much of a hilarious jumble this show really was.

One can hardly discuss this show without paying homage to the leading man, Mr. Richard Hannay. Played by Aidan Wilk, Mr. Hannay is a Canadian visitor in London when Annabella Schmidt is killed in his flat mysteriously. Accused of the murder, Mr. Hannay escapes in search of a large house in a small Scottish village, knowing only to be wary of a man missing the top of his little finger, and falls deep into the mystery of what the 39 steps really is. Hannay serves as the comic glue that keeps the show together, and Aidan brings the character to life with charisma and great comedic timing, making the stereotypical Hannay seem like a hero that hasn’t been seen before. Another performance to be noted would be that of the Professor (Benjamin Hitchcock) and his wife Mrs. Jordan (Lauren Hoffman). These two fit well together, and it is easy to see their dynamic as they exchange lines throughout the scenes. The eccentric Professor and the causal Mrs. Jordan work to create an interesting comedic duo, as he continues his evil deeds, and she maintains his home and his affairs as if nothing was amiss, making for dark and hilarious moments in the show.

John Buchan's "The 39 Steps" based on the 1935 Alfred Hitchcock film was performed at Carmel High School from Friday, October 27th to Sunday October 29th, 2017 and was truly a show worth seeing. Up next for Carmel High School is their Musical Production of “The Little Mermaid” to be presented March 9th and 10th at 7 PM March 11th at 2 PM at George Fischer Middle School.