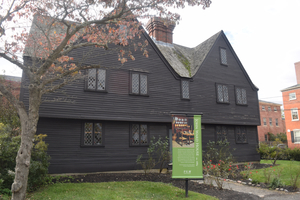 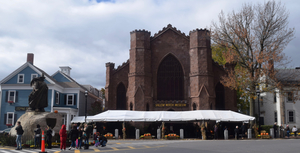 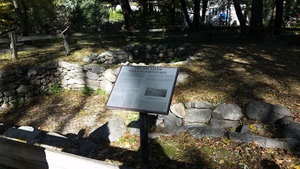 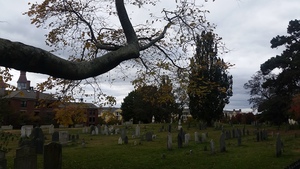 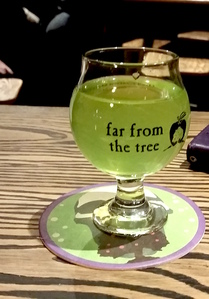 Salem, Massachusetts is a city that blends its history and modernity with stunning results. There is clearly a great respect for the tragic history of “Witch City.” Many walking tours, as well as the Heritage Trail that runs through the city, can bring you to monuments big and small that were involved in both the Witch Trials and Salem’s rich port history. There’s no shortage of things to do and see throughout the city, covering a wide variety of interests. The history of the Witch Trials is ever-present, but there’s also art museums, pirate exhibits, candy stores, and historic houses throughout the city.

We focused mainly on the events and locations tied to the Witch Trials. On Essex street sits the First Church in Salem, which has an active Unitarian Universalist congregation, and the Witch House. The Witch House is the only surviving building in Salem with a direct tie to the Witch Trials. It was the home of Judge Jonathan Corwin, and now houses a museum that is a highlight in the city. The museum gives you a peek into everyday life in the late 1600s, and into the superstitions surrounding witchcraft at the time.

As you walk east on Essex, you’ll find dozens of unique shops and restaurants, a statue of Samantha from Bewitched, and dozens of roads branching off to various attractions throughout the city.

The Old Town Hall in Derby Square hosts the critically acclaimed play Cry Innocent, in which the audience hears testimony on Bridget Bishop and decides whether or not to send her on to trial. The play is interesting, with the actors playing multiple roles, and answering audience questions both within the show, and about the circumstances surrounding the jury and those involved.

Behind Old Town Hall is an exit from the square onto Front Street, which, if followed east, brings you to the Salem Witch Trials Memorial and the Old Burying Point Cemetery. The cemetery is the resting place of witch trials judge John Hathorne, as well as several other people of historic note. The memorial, located just outside the cemetery itself, pays respects to the 20 people killed as a result of the Witch Trials.

North a bit, up past the Salem Witch Museum and Salem Common is the Howard Street cemetery, said to be the place where Giles Corey was pressed to death for refusing to be tried by the court. And back west on Pope Street is Proctor’s Ledge, recently determined to be the place where the tried and convicted witches were hanged. There is another small memorial here to remember those victims.

Moving away from the memorials and the morbid, there is plenty of life in this fascinating city. You can find great seafood, craft ciders and beer, charming coffee and candy shops. A local cidery, Far From the Tree, even has a limited cider called Ectoplasm which boast a vibrant green color and a spicy kick from the jalapenos it is brewed with.

The town also has a lot for those interested in historical architecture. Many of the homes have plaques detailing who they were built for and when. Most are privately owned and still lived in, but there are some that are run as museums. The Phillips house on historic Chestnut Street is one. The other well known home is the House of the Seven Gables, immortalized by author Nathaniel Hawthorne.

I do have one recommendation that is slightly outside of Salem. Nestled in a residential area in Danvers next to 67 Centre Street, and accessible by a short path off from the road, are the foundations of the Salem Village Parsonage. Built in 1681, the house played home to several people involved in the Witch Trials. Reverend George Burroughs lived in the home while acting as the village’s minister. He was one of people accused and hanged as a witch years later. It later became the home of Rev. Samuel Parris and his family. Rev. Parris’s daughter, Betty, and his niece, Abigail Williams, were the first two girls to show the “afflictions” that would lead to the accusations of witchcraft. Their slave, Tituba, was one of the first people accused of witchcraft, and many believe that her confession was coached, and lead to the accusations of many others.