Uncle Sam back home in Danbury 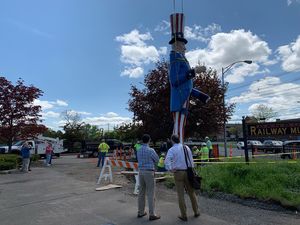 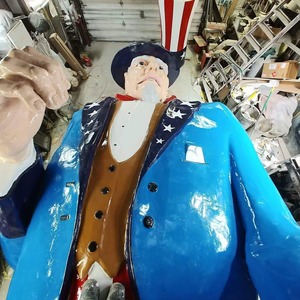 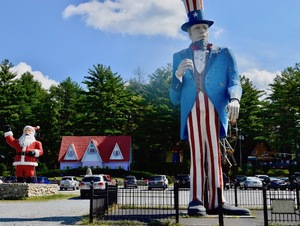 If you’ve ever driven on Rt 9 in Lake George NY, you may have noticed the 38 foot tall statute of Uncle Sam in front if the Magic Forest Theme Park.

That statue stood in front of the park for over 35 years but its original home was the Danbury Fair and it was purchased by Magic Forest owner Jack Gillette in 1982 along with other fair items when the Danbury Fair closed. Many local residents hoped to have the statue return to Danbury some day. That day arrived on May 8 when the Danbury Railway Museum had it placed on its property.

Last October, Danbury Mayor Mark Boughton announced he had reached an agreement with park owner Gillette to buy back the statue after the Magic Forest Park closed its gates in 2017 and the owner sold the property to a local developer who plans on turning the park into the Lake George Expedition Park. At that time the City of Danbury started a Go Fund Me page to help with the expenses of returning and restoring Uncle Sam to his original home in Danbury.

After transporting Uncle Sam back to Danbury, and some restoration this past winter, Uncle Sam is now, once again, looking over the City of Danbury and its residents. Mayor Boughton said in early April that the city is planning a dedication ceremony around Memorial Day. Click the photo for more photos of Uncle Sam.

For more information on the museum and its exhibits visit the Danbury Railway Museum website.