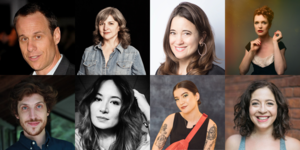 Residencies at SPACE on Ryder Farm provide artists and activists with dedicated time and space to create away from the stress and noise of everyday life. First launched in 2018, the Season Extension Residency offers SPACE alumni the opportunity to return to Ryder Farm to work on a project for a two-week residency during the month of February. The program is offered by application for SPACE alumni who have previously spent two or more weeks at SPACE through The Working Farm, Family Residency, Creative Residency or Creative Solutions Symposium.

“SPACE’s residencies take place on a homestead that has been in my family since 1795. SPACE strives to create an environment for residents where they feel supported and taken care of—an artistic home-away-from-home,” said Co-Founder and Executive Director Emily Simoness. “Like any home, we hope SPACE is a place where our alumni can return. This idea gave birth to our Season Extension Residency, which continues SPACE’s investment in our residents. As we welcome eight SPACE alumni back to the farm, we are excited to see what new collaborations will form, what new relationships will be built and what new ideas will be sparked.”

The Season Extension Residency also marks the official beginning of SPACE on Ryder Farm’s 10th Anniversary Season. Founded by a group of predominantly theatre artists to develop their own projects while contributing to the preservation of Ryder Farm, SPACE has grown to serve over 1,400 residents of all stripes since its first season in 2011. Over the past ten seasons, SPACE has established one of the first and only residencies for parent-artists and their children, mentored over 75 young professionals through its internship and fellowship program and has become one of the most sought-after artist residency programs in the country. Furthering its commitment to the sustainability of Ryder Farm, in 2019 SPACE took on management of the organic farming operations, spearheading a unique new model for reciprocity between the arts and agriculture.

SPACE will announce the full roster of residents for its June-October residency season at its annual Season Kick-Off Party on May 4th, 2020.

Located on Starr Ridge Road in Brewster, New York, Ryder Farm was first established by Eleazer Ryder in 1795, was an early adopter in the organic movement and was one of the founding farms to participate in the Union Square Greenmarket in New York City. In 2019, SPACE assumed management of the agricultural operations, and is deeply committed to ensuring Ryder Farm is a source of inspiration and nourishment for all. In addition to stocking SPACE’s residency kitchen, produce from Ryder Farm is available at the Friday Union Square Greenmarket in NYC, at SPACE’s roadside stand on Starr Ridge Road in Brewster and via a sliding scale CSA (community supported agriculture) membership program serving both NYC and Brewster.