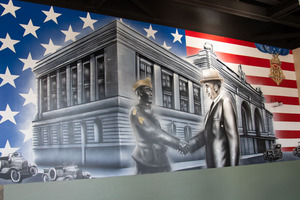 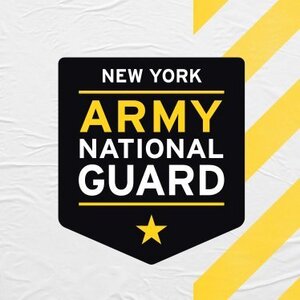 Johnson distinguished himself as a member of 369th Infantry Regiment, the famous "Harlem Hellfighters," part of the 93rd Division, American Expeditionary Forces, during combat operations against the enemy on the front lines of the Western Front in France during World War I.

The mural depicts Johnson shaking hands with New York governor Al Smith upon his return to his hometown of Albany in 1919.

The painting is by Westchester artist Chris Rios who runs Rios Studios. Rios depicted Sgt. Henry Johnson meeting with New York Governor Al Smith in Albany, New York, where Johnson worked as a luggage handler at the train station depicted in the painting.

Johnson received the French Croix De Guerre in recognition of his heoric actions on May 14, 1918 when he and his colleague Pvt. Needham Roberts, fought hand-to-hand with a German raiding part of 25 Soldiers and defeated them.

The inspiration for the mural came from a PBS Documentary on Johnson that reported the welcome home event at the Albany Train Station at which Governor Smith shook hands with Johnson. Camp Smith was named for Governor Al Smith who served as governor in 1919-1920 and then again from 1923 to 1928.

Johnson went on a government supported speaking tour after the war, but when he complained about the way African-American Soldiers had been treated by the Army, the speaking engagements dried up. Johnson died in 1929 and is buried at Arlington National Cemetery.

To learn more about the Harlem Hellfighters, click here.