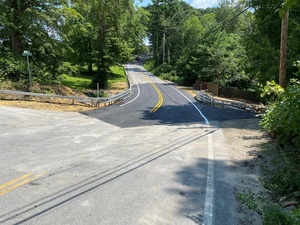 The repairs to Fairfield Drive in Putnam Lake that were expected to take four months have been completed ahead of schedule and the road is once again open for travel, Putnam County Executive MaryEllen Odell announced.

“Drivers in Putnam Lake can now travel across Fairfield Drive with total confidence in its safety,” said Legislator Ginny Nacerino, of Patterson.  “To have the bridge fully replaced is a real bonus to the residents and businesses that rely on Fairfield Drive every day. I want to thank the Putnam County Highway Department for a job well done.”

A stream that runs from Putnam Lake to Lost Lake under Fairfield Drive near South Lake Drive had eroded the culvert making the crossing, which carries more than 4,500 vehicles a day, unsafe.

In 2019, Putnam County received a grant to replace the severely deteriorated Fairfield Drive culvert.  Once awarded, the county had 24 months to design, bid and build the project, said Fred Pena, Putnam County Commissioner of Highways and Facilities.  The large cast-in-place and precast concrete design had several construction challenges including dewatering, depth of excavation and weather.  The contract provided 120 calendar days to complete the construction.  Despite several weather delays, the construction was completed ahead of schedule on July 28.

“We would like to thank the entire project team including Barton and Loguidice Engineering, Colliers Engineering, Gianfia Contracting and the employees of the Putnam County Highway Department,” Pena said. “We would also like to thank Legislator Nacerino and the Putnam Lake community for their input and patience during the construction.”

Putnam County and the Highway Department maintain its commitment to improving the roadway infrastructure throughout the County and will continue to do so.