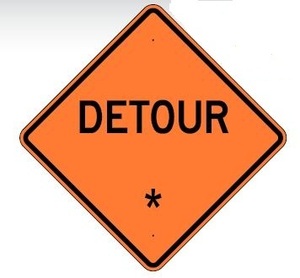 The traffic detour at Sodom Road Bridge will be reinstituted for about three weeks starting Monday Dec. 6 as NYSEG reroutes the gas line that feeds Brewster Village.

This is a NYSEG project, not a Putnam County Highway Department project. In accordance with its NYC DEP permits, NYSEG must decommission the gas line that spans the East Branch of the Croton River and reattach the line to the bridge, where it had been before construction started.

“It’s unfortunate that NYSEG couldn’t get its portion of the work done on schedule and that drivers will be inconvenienced,” County Executive MaryEllen Odell said. “NYSEG’s gas line, however, is essential to residents and it’s best that the work is done safely and completely now.”

The gas line reattachment was originally supposed to be accomplished in accordance with the county contractor’s schedule and finished by mid-November. When NYSEG couldn’t make the deadline, it delayed the project until January.  Rather than further inconvenience local drivers who were detoured onto I-684 and Route 22 while the bridge was closed, the county highway department reopened the bridge last month as soon as its work was complete.  Then, this week, NYSEG notified the county highway department that it had changed its schedule again and would begin work in the week of December 6.

NYSEG now plans to have the permanent gas main relocated by midweek and the road reopened by December 23.