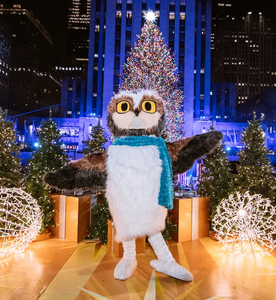 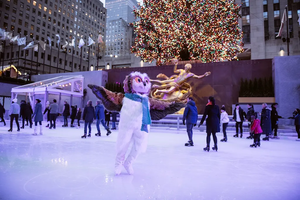 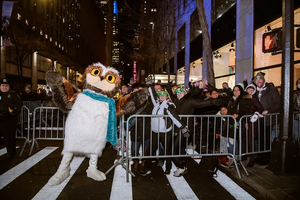 Anyone who has walked the streets of New York City on a brisk December night has taken comfort in the warm glow of lit Christmas trees peeking out of apartments and office lobbies, and adorning department store windows and pedestrian plazas. But of all the trees in the city, there’s only one that both locals and visitors from around the world return to year after year, and that’s the Christmas Tree at Rockefeller Center.

Last year, an owl chose the iconic Tree as its NYC home base. From the moment the tiny saw-whet owl was spotted in the massive, 75-foot Norway spruce, she stole New Yorkers’ hearts. She was named Rocky (short for Rockefeller) and cared for by a wildlife center before being released back into the wild.

Legend has it Rocky went home to Upstate New York absolutely raving about her time in the Big Apple. Her tales of bright lights, yellow taxis, and elegant ice skaters caught the attention of her best friend, a notoriously curious owl named Roxy, who decided right then and there that she needed to fly straight to Manhattan and see the action for herself.

Now, Roxy is proud to call Rockefeller Center, the very heart of New York City, her forever home. The ambitious little owl even scored herself a job as an official ambassador, and there really is no one better suited for such a role. Roxy’s passion for Rockefeller Center has led her to get to know every inch of it — and to befriend every visitor who crosses her path.

Since moving to New York, Roxy has lived in all 10 buildings at Rockefeller Center and has done every job, from collecting tickets at The Rink and leading tours to hosting at the Rainbow Room. A Rock Center trivia whiz, she’s quick with a fun fact. Not only does she know how many lights are on the tree (more than 50,000), but she’s counted them herself.

Her favorite spot of all is Top of the Rock, where she currently nests with a bird’s-eye view of the fun. Like a true go-getter, she has not only scoped out a prime slice of real estate for herself, but she has also made friends in high places, including Correll Jones (better known as CJ), the “Mayor of Rockefeller Center.” CJ has taught her so much of what she knows about the area’s history and culture, and sharing this knowledge, especially with younger visitors, means the world to her.

Although moving away from home for the first time can be lonely, Roxy always jumps at the chance to meet new people, and her time in the city that never sleeps has been buzzing with excitement. She’s inspired by the energy of New York in every season, but the holidays are her favorite time of year by far, and she aims to spread her festive spirit and infectious enthusiasm throughout New York City and beyond.

So, where can you spot Roxy on your next visit? When she’s not sneaking into the studios to get a peek at one of her favorite shows or scheming to transform an elevator into a winter wonderland, you might find her dining with her pigeon companion at Top of the Rock, helping out with elevator operations, or even window shopping. Of course, she’ll also be sending her own Roxy merch from Top of the Rock Shop back home to wow her family and friends.

Best of all, Roxy will be walking all around campus and skating at The Rink three more times this month, on Dec. 12, 27, and 29. If you spot her, upload a photo and tag Rockefeller Center with hashtag #RoxytheOwl. Then listen up, because if you’re lucky, you’ll hear her signature cheer, “Sa-Wheet!” ringing from the rooftops. In that moment, it will be impossible not to feel the holiday spirit Rockefeller Center is so famous for.