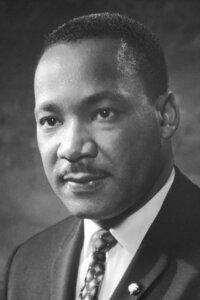 "Today we pause to reflect and remember Dr. Martin Luther King Jr.'s teachings on justice, peace, equality, love - and his deep, abiding faith in people given a lifetime confronted by injustice," Governor Hochul said. "As we celebrate Dr. King's legacy, it's up to each of us to reward that faith and do everything in our power to build a better, more just society. Divided, we falter alone - but united, we rise together."

The landmarks to be lit in recognition of Martin Luther King Jr. Day Include:

Governor Hochul announced in December that New York State's annual commemoration of the life and legacy of Dr. Martin Luther King, Jr. will be presented as a statewide broadcast event, "New York State Celebrates Dr. Martin Luther King, Jr.: Opportunity and Promise," airing on PBS stations throughout New York beginning MLK weekend and streaming at empirestateplaza.ny.gov/nyking. The one-hour tribute to Dr. King showcases people and organizations from across New York State that embody the principles of one of America's most significant leaders for social justice, freedom, and equality. Program times will vary by region, and viewers are encouraged to check their local TV listings.

In addition to the performances, people are invited to view the New York State Dr. Martin Luther King, Jr. Student Art and Essay Exhibition, which features submissions from K-12 students throughout the state that are inspired by Dr. King's Six Principles of Nonviolence. The virtual gallery will be available for viewing at empirestateplaza.ny.gov/nyking from January 17 to February 28.

"I have a dream that one day this nation will rise up and live out the true meaning of its creed: "We hold these truths to be self-evident, that all men are created equal."

I have a dream that my four little children will one day live in a nation where they will not be judged by the color of their skin but by the content of their character.

I have a dream today!

I have a dream that one day, down in Alabama, with its vicious racists, with its governor having his lips dripping with the words of "interposition" and "nullification" -- one day right there in Alabama little black boys and black girls will be able to join hands with little white boys and white girls as sisters and brothers.

I have a dream today!

This is our hope, and this is the faith that I go back to the South with."