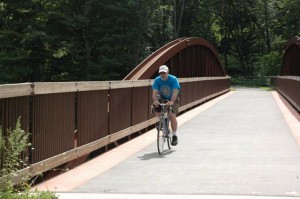 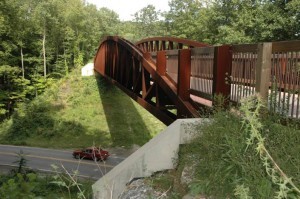 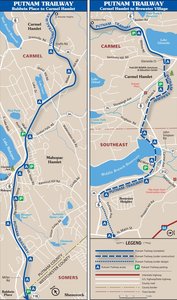 The rail trails in Putnam County may be all fun and games to recreation enthusiasts, but they mean business to the Putnam County Economic Development Corporation and to many small enterprises along the 12-mile route and beyond. Putnam County EDC President Jill Varricchio is totally onboard with the economic potential that the 12-mile stretch of paved rail trails have to offer.

“When I look at the opportunities we have on Putnam’s rail trails, I look both ways: To the north, I see Dutchess County’s Walkway Over the Hudson attracting over a million people each year, with about half of them coming from outside Dutchess and Ulster counties. Spending at local stores is up, new jobs have been created and a new county tax revenue stream has been generated.

“If I look the other way, I see the High Line linear park stretching along a deserted elevated train track along Manhattan’s West Side, which has become the second most visited cultural venue in New York City. It’s attracting $2.2 billion in new economic activity and is projected to raise tax revenues by an estimated $980 million over the next decade.

“We are somewhere in the middle—and that’s a great place to be,” Jill adds. “We’re promoting our accessibility to New York City to encourage people to make Putnam County a destination.

Varricchio says that factors once regarded as inhibitors to business development, such as protected lands along the reservoirs and zoning restrictions prohibiting certain kinds of development, are now stimulating economic activity. Putnam County’s pristine trails are ‟attracting the kind of economic growth people want,” she says. ‟This is about strengthening the small businesses along the trail, the backbone of our local economy.”

Here’s a tour of some of the commercial and recreational activities the rail trail is driving...

Donna Massaro, the owner of the popular Freight House Café in Mahopac, New York, converted it from a historic railroad station, but she still relies on an old-fashioned approach to promote it. Using chalk, she writes information about her café on the Putnam County rail trail pavement, starting from a quarter-mile away. Then, at the closest point, she’s rigged a clothesline to take and fulfill orders for trail riders who want to remain on the trails. “Our customers love our trails, and I love my customers,” she says. “They’re cycling, walking and roller skating in the warmer months and cross country skiing in the winter. They’re not just local residents—they’re coming from all over.”

Lukas Herbert, who operates Gotham Bike Tours located in Manhattan, recently led participants attending a conference in New York City on a restorative ride on the rail trail in Putnam, something he frequently does. The tour arrived in Village of Brewster by rail with rented bicycles then rode back on a day-long trip. “Tourists definitely spend on the trails,” he says.

Travel on these trails flows in both directions. Kevin Callahan is an avid cyclist, and he and his wife frequently bike from their home in Putnam County to New York City along trails through Westchester County. An associate broker with Covington Commercial Realty, he is also a board member of the Putnam County Visitors Bureau and a member of the Alliance for Balanced Growth, a Putnam County EDC initiative.

“Putnam County’s proximity to New York City and the fact that it is a transportation hub makes it ideally positioned to take advantage of significant economic opportunities,” he says. “We see people of all ages—joggers, runners, roller bladers, cyclists, cross-country skiers—on the trails.”

Robert Kelly, owner of Pawling Cycle and Sport on Route 22 in the Village of Pawling, is organizing the annual Tour of Putnam community bike ride scheduled for Sunday, July 9. Traversing roads as well as rail trails, “it’s a ride-at-your-own-pace event, [which will] let people see what we have to offer.”

According to a recent study by the Pennsylvania Land Trust, rail trails not only boost spending at local businesses, they also increase the value of nearby properties, make communities more attractive places to live, influence business location and relocation decisions, reduce medical costs by encouraging exercise and other healthy outdoor activities, revitalize depressed areas by creating a demand for space in what were once vacant buildings, enhance tax revenues and help cut fuel consumption.

Marcela Rojas is Manager of Public and Community Affairs at HealthQuest, a local family of nonprofit hospitals and healthcare providers in the Hudson Valley. She has worked together with Putnam County officials to promote the Get Fit Challenge (GetFitHV.com)—a six-week initiative in the fall and spring designed to get people exercising for 30 minutes a day. “We want people to get moving toward better health, and the Putnam Rail Trail is a jewel of a place to begin,” she says.

The Putnam County Economic Development Corporation works to drive the economic vitality of Putnam County by fostering an environment conducive to the creation and retention of business delivering an enhanced quality of life for its residents.