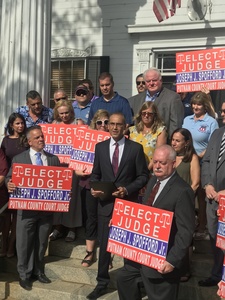 Town of Carmel Justice Joseph J. Spofford, Jr. announced that he is seeking the Office of Putnam County Court Judge. The vacancy was created with the sad and untimely passing of Judge James J. Retiz. Judge Spofford will be the candidate of both the Republican and Conservative Parties. Judge Spofford made his campaign announcement on Wednesday, July 17 at 5pm on the steps of the historic Putnam County Courthouse.

“During his many years as a Town Justice in the Town of Carmel, Joe has demonstrated every characteristic one would want to see in a judge:  fairness and compassion in all matters, firmness and resolve when required and the sober and thoughtful administration of justice for all,” Birmingham continued.  “These attributes coupled with his judicial experience, academic credentials and community involvement demonstrate that he has the caliber of character and dependability of wisdom to be our next County Court Judge.”

Judge Spofford has 30 years of court experience – family, surrogate, criminal and supreme court and has extensive experience in the local Town and Village court system. He has a stellar reputation with the judges and practicing attorneys in Putnam. Spofford was first appointed to the Carmel Town Court in December 1999, and has successfully run for re-election in 2000,2004, 2008, 2012 and 2016.

“I am proud to recommend Joseph Spofford as an outstanding candidate for County Court Judge. His 19 years of experience as a Town Court Justice, his diverse background as a private attorney, his affable demeanor and approachable attitude all combine to result in the perfect temperament for a member of the Judiciary,” Joseph J. Tock, Esquire.

"During Joe's 20+ years on the bench, I have appeared in front of him as a prosecutor and, more recently, as a defense attorney. He is very experienced, knowledgeable and very fair. He is a perfect candidate for Putnam County Court Judge” says John “Jay” Hogan, prominent Putnam County Attorney.

“I am honored and humbled to have the support of Michael Bartolotti, Dan Birmingham, Jay Hogan and Joseph Tock; I cannot thank them enough. As Putnam County Court Judge I will continue to administer justice, without fear or favor, in a fair and equitable manner.”

Judge Spofford is the father of three (3) children and lives in Mahopac, New York.