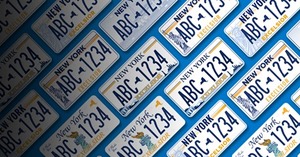 New Yorkers to Vote for Favorite Among Five Proposed Designs

Governor Andrew M. Cuomo this week launched a statewide survey to select New York State's new license plate design. The voting - which opened earlier this week on the Governor's website - runs through Monday, September 2nd and will allow New Yorkers to choose their favorite among the five proposed designs. Voting will also be available to the public at the Governor's exhibit at the Great New York State Fair starting August 21st. The license plate with the most votes will become the State's official license plate and will be available to customers beginning April 2020.

"License plates are a symbol of who we are as a state and New Yorkers should have a voice and a vote in its final design," Governor Cuomo said. "As the life span of the old plates comes to an end and we develop new ones that are as easy to read as possible, I encourage all residents to take part in choosing this piece of our state's history and the State Fair is a perfect place to do that."

The new plates will replace the aging Empire Blue & White plates, most of which are more than 10 years old. Once the new plates become available, the Department of Motor Vehicles (DMV) will also stop issuing the Empire Gold plates and begin fully transitioning to the new design.

Department of Motor Vehicles Commissioner Mark J. F. Schroeder said, "The time has come for New York to have a new license plate, which is why we worked hard to create design options that not only capture the heart of the Empire State, but also that our customers will be proud to put on their vehicles. I hope everyone across the state will take a few minutes to view the options and vote for their top pick."

The contest kicks off a new 10-year license plate replacement program to ensure all New York license plates on the roadways are reflective and easy to read. Currently, over 3 million vehicles in New York State have aging plates that are 10-years-old or older. Because of their age, many of them are damaged, oxidized and peeling, making it difficult or impossible to read the license plate number. Having a license plate that is legible reduces a motorist's risk of being pulled over and cited for having an illegible license plate.

Beginning April 2020, through the plate replacement program, as customers renew their vehicle registrations over the next two years, those with license plates that are 10-years-old or older will be issued new plates. The current $25 license plate replacement fee will be added to the cost of the vehicle owner's registration renewal. Customers may also keep their current license plate number for an additional $20 fee. Plate issuance begins for both original issuance and renewals on April 1, 2020.

In addition to the State's official license plate, the DMV offers more than 200 custom license plates, many of which support charitable causes. A complete list of available custom plates can be found on the DMV's website at https://dmv.ny.gov/plates/plates.