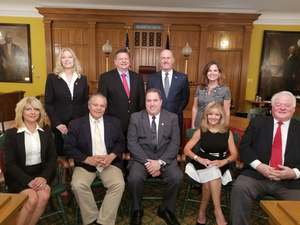 Putnam County Legislature adopts 2020 Budget.
The Putnam County Legislature adopted a $165.1 million budget for 2020 that remains within the state property tax cap and maintains the county’s conservative approach to spending.
The Legislature made minor adjustments to the budget proposed by Putnam County Executive MaryEllen Odell earlier this month, shortly after receiving notice that Moody’s Investor Services had upgrading the county’s bond rating to the coveted Aa1 status. That proposal represented a conservative $5.9 million, or 3.7 percent, spending increase over the 2019 budget.
“This is an outstanding budget,” Legislature Chairman Joseph Castellano said. “I’m really excited about the bond rating, the Aa1 rating. It’s great for residents. Going forward we can save some money when we borrow. It’s a testament to all the hard work done by Putnam County employees. This year we briefly touched on the possibility of losing a few employees, but I am very grateful to note that there were absolutely no layoffs this year. I’m looking forward to 2020.”
Some of the Legislature’s changes included reductions to the Planning Department budget, the Transportation Fund Balance and Sheriff’s Department overtime.
“This is a team effort and this is a bare bones effort, which is the reason there is not a million cuts,” Legislator Ginny Nacerino said at the Tuesday night meeting. “You can do that when you have a good budget handed to you. “
The Legislature also put several items into a contingency fund, holding the money for future use or while the board seeks more information.
Among the items held in contingency are $15,000 for maintenance in Parks and Recreation, $30,000 for special services in the District Attorney’s office, $15,000 for license plate readers requested by the Sheriff’s Department and almost $18,000 for a promotion to sergeant.
“We want to have clear policies and procedures around the use of data in the license plate readers,” Legislator Neal Sullivan said. “We want to know how long they are going to keep in and who is going to be able to see it. There are a lot of questions regarding the use of data and we want to know we have the correct policies in place.”
The personnel committee is awaiting clarification on whether the promotion to sergeant involves a road patrol officer or a school resources officer and will discuss the matter in its November meeting.
“My question is, if the SRO is partly paid for the by the school district and we move an SRO to a sergeant position, who is paying for it?” Chairman Castellano asked. “We can’t just impose a cost on the schools or we need to know if the county is footing the bill.”
The board held the Sheriff’s Department to a 2 percent increase in overtime. The Legislature agreed to fund $520,000 in overtime, an increase of $12,000 over the department’s 2019 spending, but $242,000 short of what the department sought