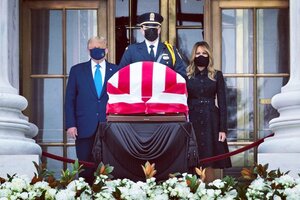 President Donald Trump revealed early this morning that he and the First Lady Melania have tested positive for COVID-19. The announcement came just hours after Hope Hicks, a White House aide, with whom they had recently traveled, also tested positive.

The First Lady, Melania Trump followed up with a tweet confirming their diagnosis and added: "Please be sure you are staying safe & we will all get through this together.”

Dr. Sean P. Conley, the White House physician, said in a statement“The president and first lady are both well at this time, and they plan to remain at home within the White House during their convalescence,” adding: “Rest assured I expect the president to continue carrying out his duties without disruption while recovering, and I will keep you updated on any future developments.”. Dr. Conley  pronounced Mr. Trump in “very good health” last year after his full medical checkup.

A campaign rally scheduled for today in Florida has been cancelled and appearances at rallies in Wisconsin this weekend are also in doubt as is the scheduled October 15th debate against Democratic nominee Joe Biden. Aides to the president would not say whether he was experiencing symptoms but some noticed his voice was "raspy" on Thursday afternoon, although it was unclear if that was due to the virus or because of all the speaking engagements he has attended recently.  Eight out of every 10 deaths attributed to Cocid-19 in the United States have been among those 65 and older according to the Center for Disease Control and Prevention (CDC).

Trump debated Joe Biden this past week although both men were separated by at least 10 feet during the debate and neither approached each other throughout the evening according to sources.

Several world leaders have been infected with the virus over the past few months including British Prime Minister Boris Johnson, who was hospitalized earlier this year and spent 3 days in the intensive care unit of St.Thomas" Hospital in London. Mr. Johnson has since made a full recovery and returned to work only 2 weeks after his hospital stay back in April.

President Trump, at 74 years old, does fall into the high risk age group for complications due to the infection.