Details
Published on Thursday, 15 October 2020 11:57
Written by Office of the Governor. 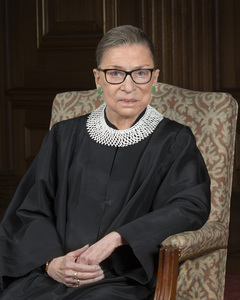 Statue to Memorialize Renowned Jurist in Her Birthplace of Brooklyn

Governor Andrew M. Cuomo yesterday appointed 23 members to a new commission that will oversee the creation of a statue honoring the late Justice Ruth Bader Ginsburg. The commission includes members of Justice Ginsburg's family, close friends, esteemed colleagues, and other leaders. The commission will provide recommendations to the Governor regarding the artist, design, location and installation of the memorial statue.

"Last month I announced New York State will honor the life and legacy of the late Justice Ruth Bader Ginsburg with a statue in her native Brooklyn. Now I'm releasing a list of the 19 members that we have appointed to the commission who will oversee the creation of the statue. Justice Ginsburg will forever stand as a singular figure in history, unmatched in her pursuit of justice and equality under the law for all Americans. Only the second woman to serve on the Supreme Court, Justice Ginsburg was a tireless champion for women's rights and throughout her lifetime brilliantly navigated a complex landscape of gender-based discrimination to ultimately ascend to the highest court in the land. She leveraged that position to fiercely advocate for equal rights and ensure those who followed in her footsteps would face fewer obstacles along the way," Governor Cuomo said. "Ruth Bader Ginsburg embodied a set of ideals often missing in today's civic dialogue - she showed us reason, empathy and hope. Her legacy as a jurist, professor, lawyer and scholar will endure for generations and we are honored to erect a permanent statue in memory of Justice Ginsburg. Lord knows she deserves it."

The commission comprised of 18 members and 5 honorary members appointed by the Governor includes: