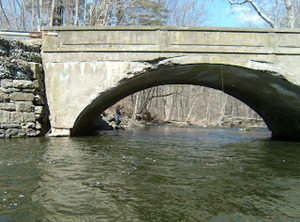 The Sodom Road Bridge being built in the Town of Southeast is designed to require less maintenance than previous bridges and is the first of its kind to be built in Putnam County.

The bridge, which is expected to be completed in November, will not need regular painting and is less susceptible to rust than earlier bridge types.

“It’s good to know that this bridge replacement will last a long time,” Putnam County Executive MaryEllen Odell said. “Drivers who have relied on a detour that included busy Route 22 at the juncture of I-684, will be able to breathe a sigh of relief as soon as that bridge is finished.”

The new Sodom Road Bridge is a simple span, pre-stressed concrete beam bridge with integral abutments on micropiles, Putnam County Highway and Facilities Commissioner Fred Pena said. The beams do not require periodic painting.  Integral abutments eliminate joints, which helps prevents the intrusion of road salts and extends the useful life of the structure, and a pile supported abutment is resistant to failure caused by scour.

Work on the bridge began in late May and was predicted to last six months.