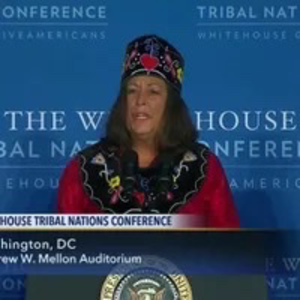 President Biden yesterday announced his intent to appoint Marilynn Malerba as Treasurer of the United States. Malerba, who is the Chief of the Mohegan Tribe, will be the first Native American to hold the position.

The Treasurer of the United States directly oversees the U.S. Mint, the Bureau of Engraving and Printing, Fort Knox, and is a key liaison with the Federal Reserve. Chief Malerba will also serve as a senior advisor to the Secretary of the Treasury in the areas of community development and public engagement.

Connecticut Governor Ned Lamont said in a statement yesterday “I commend and applaud President Biden’s historic selection of Chief Lynn Malerba to serve as treasurer of the United States. Throughout her career, she has demonstrated a commitment to public service, most recently as chief of the Mohegan Tribe, where she led with dignity and respect for all. Her appointment is well deserved, and I celebrate yet another Connecticut resident joining the Biden administration in a high-ranking position.”

Marilynn Malerba is the Chief of the Mohegan Tribe, a lifetime appointment made by the Tribe’s Council of Elders. Prior to becoming Chief, she served as Chairwoman of the Mohegan Tribal Council, and served in Tribal Government as Executive Director of Health and Human Services. Preceding her work for the Mohegan Tribe, Malerba had a lengthy career as a registered nurse, ultimately serving as the Director of Cardiology and Pulmonary Services at Lawrence & Memorial Hospital. Additionally, Malerba currently serves as a member of the Treasury Tribal Advisory Committee. This seven-member committee advises the Secretary of the Treasury on significant matters related to the taxation of Indians, the training of Internal Revenue Service field agents, and the provisions of training and technical assistance to Native American financial officers.