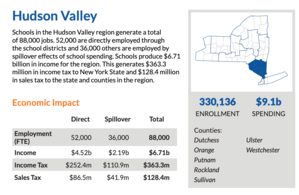 New research from the Association of School Business Officials (ASBO) documents the economic impact of school districts in each region of the state.

Public schools in the Hudson Valley directly employ 52,000 Full-time equivalents (FTEs) and 36,000 other FTEs are employed by the spillover effects of school spending. These spillover jobs are generated by the district purchasing services or products from local vendors and by school district employee spending (i.e. teacher's purchasing gasoline or groceries).

These 88,000 jobs combined generate $6.7 billion in income, $363.3 million in income taxes and $128.4 million in sales tax to local counties and the state. The data used for this research comes from information provided by school districts to the state education department for the 2017-18 school year.

"This analysis shows that public education has a substantial economic impact on local communities, their regions and the state in addition to its important role in preparing students for college or careers," says Michael Borges, Executive Director of ASBO New York.