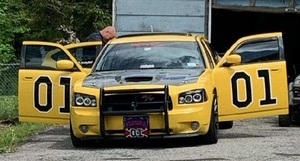 On May 22, 2020, the New York State Police Traffic Incident Management Unit in conjunction with the State Police in Troop F arrested Robert M. DiGregrio, age 29, of Rock Tavern, NY, for Unlawful Fleeing a Police Officer in the 3rd degree, a class A misdemeanor, Reckless Driving, Aggravated Unlicensed Operation in the 3rd degree, both unclassified misdemeanors, and various vehicle and traffic violations.

At approximately 10:30 a.m. Troopers attempted to conduct a vehicle and traffic stop on a 2006 Dodge Charger for a violation of the vehicle and traffic law on the Taconic State Parkway in East Fishkill.  The operator of the vehicle failed to comply, and led the State Police on a pursuit that ended in Rock Tavern.  The operator, Robert DiGregrio, was located at his residence and subsequently arrested.

DiGregrio was issued an appearance ticket returnable to the town of East Fishkill on July 15, 2020, at 5:00 p.m.