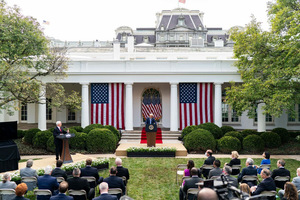 President Trump has announced that his Administration will distribute 150 million rapid, point-of-care Coronavirus tests in the coming weeks. This action will more than double the total number of tests already performed in the United States.

“Fifty million tests will go to protect the most vulnerable communities, which we’ve always promised to do, including 18 million for nursing homes; 15 million for assisted living facilities; 10 million for home, health, and . . . hospice care agencies; and nearly 1 million for historically black colleges and universities,” the President said.

Another 100 million rapid tests will be given to states and territories to support efforts to reopen their economies and schools as quickly and safely as possible.

“We are now at an inflection point in testing,” President Trump said. The United States now has the capacity to run, on average, 3 million tests per day. That number doesn’t include “pooled testing,” which could multiply that figure several times.

Vice President Pence said he believes an announcement about a Coronavirus vaccine will come soon after yesterday’s historic milestone.

“It’s a testament to great companies like Abbott Laboratories and the thousands of employees who, Mr. President, I know have literally worked around the clock since those early days in this pandemic, when you brought in the greatest research companies in America,” the Vice President added.

Mississippi Governor: “This is a game-changer.”