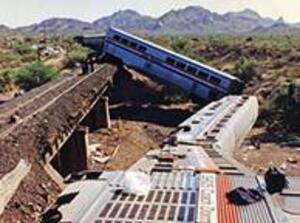 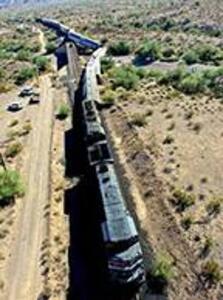 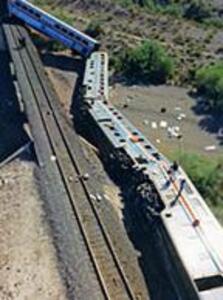 FBI Continues to Investigate; Reward of up to $310,000 Remains

On October 9, 1995, the Amtrak Sunset Limited passenger train was derailed at around 1:35 a.m. in a remote desert area approximately 70 miles southwest of Phoenix, Arizona.

This incident resulted in the death of one Amtrak employee, serious injuries to 12 others, and minor injuries to approximately 100 additional passengers. At the time of the derailment, the Sunset Limited had 258 passengers onboard. Images of the scene after the derailment are below.

“A hallmark of the FBI is that we don’t forget,” said Sean Kaul, special agent in charge of the FBI Phoenix Field Office. “There were children onboard the train as young as 9 months old, an innocent man lost his life, and many others were injured. For 25 years the victims of this crime, their family, and friends have suffered. We will continue to aggressively pursue this investigation, for as long as it takes. We are determined to seek justice for the victims of this senseless crime.”

A reward of up to $310,000 is still being offered collectively by multiple entities in exchange for information leading to the arrest and conviction of the individual(s) responsible for the derailment of the Amtrak passenger train.

It should be noted that each entity offering reward money attaches a separate set of criteria that must be met in order for the reward money to be paid. The reward is broken down as follows:

If you have information about the derailment of the Sunset Limited, please report it to the FBI Phoenix Field Office at 623-466-1999 or tips.fbi.gov.