Details
Published on Wednesday, 12 May 2021 08:59
Written by U.S. Consumer Product Safety Commission (CPSC) is warning consumers about the increased risk of carbon monoxide (CO) poisoning, fires and electric shock that can happen as a result of 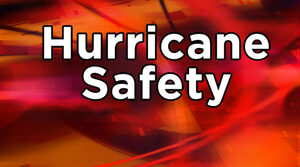 June 1 marks the start of the 2021 Atlantic hurricane season, and the U.S. Consumer Product Safety Commission (CPSC) is warning consumers about the increased risk of carbon monoxide (CO) poisoning, fires and electric shock that can happen as a result of hurricanes and severe storms.

“Millions of Americans who are still dealing with the stress of the global COVID-19 pandemic also live in regions prone to devastating hurricanes and severe storms,” said CPSC Acting Chairman Robert Adler.  “It only takes one hurricane to cause massive destruction and loss of life.  Be prepared, stay informed, and keep safe before and after storms.”

Consumers need to be especially vigilant when storms knock out their electrical power.  Many use portable generators as a source of power, exposing themselves to increased risk of carbon monoxide (CO) poisoning and fire.  CO is called the invisible killer because it is colorless and odorless.  According to the Centers for Disease Control (CDC), more than 400 people die each year in the United States from CO poisoning.

While not solely from storm use, there were 78 deaths on average each year between 2015 and 2017, from CO poisoning associated with generators, according to CPSC’s latest report.  Non-Hispanic Black or African Americans are at higher risk, accounting for 22 percent of these generator-related CO deaths from 2009 through 2019, which is nearly double their estimated 13 percent share of the U.S. population.

Poisonous carbon monoxide from a portable generator can kill you and your family in minutes.  Follow CPSC’s safety tips below to help keep your family safe before and after storms:

Once the storm has hit, and the power is out, now what?

Other product safety hazards during hurricane season include:

- Never use charcoal indoors.  Burning charcoal in an enclosed space can produce lethal levels of carbon monoxide.  Do not cook on a charcoal grill in a garage, even with the door open.

Use flashlights instead of candles.  If you must use candles, do not burn them on or near anything that can catch fire.  Never leave burning candles unattended.  Extinguish candles when you leave the room and before sleeping.

- Before using your appliances, have a professional or your gas or electric company evaluate your home and replace all gas control valves, electrical wiring, circuit breakers, and fuses that have been under water.

GAS LEAKS: IF YOU SMELL IT, LEAVE, THEN REPORT IT.

If you smell or hear gas, do not turn lights on or off, or use electrical equipment, including a phone.  Leave your home and contact local gas authorities from outside.

Remember, it only takes one storm to wreak havoc causing mass destruction and loss of life.  Stay informed, be prepared and keep safe!

NSN Poster – Safety in the Storm, When Hurricanes Happen

CPSC spokespeople are available for interviews.  Email  This email address is being protected from spambots. You need JavaScript enabled to view it.  or call 240-204-4410 to arrange for an interview.

About the U.S. CPSC

Federal law bars any person from selling products subject to a publicly announced voluntary recall by a manufacturer or a mandatory recall ordered by the Commission.