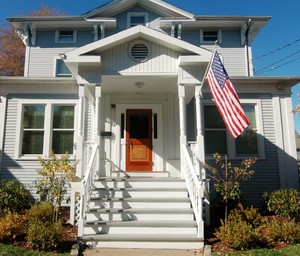 Homes for the Brave observes the anniversary of Female Soldiers: Forgotten Heroes, a housing and support services program for women Veterans and their children

This month, Homes for the Brave—a nonprofit that helps individuals experiencing homelessness return to meaningful and productive lives—celebrates the ten-year anniversary of its Female Soldiers: Forgotten Heroes program. Since November 2011, Female Soldiers: Forgotten Heroes (FS:FH) has provided safe housing and support services to 149 women Veterans and their young children.

When FS:FH welcomed its first resident in November 2011, it was the only program of its kind in the tri-state area. “We are proud to still be the first and only home exclusively for homeless female Veterans in the state of Connecticut,” said Homes for the Brave CEO Vincent Santilli. “We are even more proud of the residents who have worked with our compassionate and talented staff to establish permanent housing and achieve their personal goals.”

One example of the transformation women have experienced through FS:FH is a U.S. Navy Veteran named Stephanie, who shared her story in honor of the anniversary.

“After I was discharged from the Navy, I moved back home with my father, where I experienced nontraditional domestic violence,” Stephanie recalled. “I have a son who was five at the time, and our living environment was very toxic for both of us.”

Lacking a support system and established credit, she felt like she had nowhere to go. Her therapist at the Veterans Administration (VA) suggested that she look into FS:FH.

“All I felt when I walked through the door was love and hope that I wouldn’t be stuck in my situation forever—I knew I had found a way out.”

After utilizing the housing and support services at FS:FH, Stephanie now feels confident in her ability to cook, live independently in an apartment, and financially support her son. She is also pursuing her bachelor’s degree in social work and intends to earn her master’s degree with the goal of helping others overcome domestic violence situations. “Instilling this confidence in me is forever life changing because I can not only apply it to finding housing but to every other aspect of my life. My plans for the future are endless.”

As Homes for the Brave celebrates a decade of success, Santilli and the staff know that their work is not complete.

According to the U.S. Department of Veterans Affairs, women are the fastest growing group in the nation’s population of Veterans experiencing homelessness. Data from a 2017 U.S. Department of Housing and Urban Development (HUD) report showed a 7% increase in female veteran homelessness, whereas the male population saw an increase of 1%. This trend continued into 2019 as the VA reported a 2% increase in female Veteran homelessness, while the population of their male counterparts fell by 3%. It is expected that the number of women Veterans in need will continue to grow due to the impact of the COVID-19 global pandemic.

“Going forward, we will continue our mission and expand our services to meet the unique challenges faced by the women Veterans we serve,” said Santilli.

You can learn more and hear Stephanie’s full story by viewing 10th Anniversary –Female Soldiers Forgotten Heroes on YouTube. To find out how you can help the women and children at Female Soldiers: Forgotten Heroes succeed, contact Mary Elizabeth Albert at  This email address is being protected from spambots. You need JavaScript enabled to view it. .