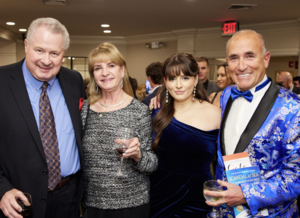 When a passionate group of animal lovers, board members, Zoo supporters and staff get together to raise funds for Connecticut’s Beardsley Zoo, the outcome is success beyond anyone’s wildest imagination. The Zoo’s third in-person Gala returned this year on October 29 at the Inn at Longshore in Westport. The Centennial Gala, celebrating the Zoo’s 100th year, raised more than $100,000 for the Zoo. All funds raised that evening support the Zoo’s mission of conservation, education, research, and guest experience.

Nearly two hundred fifty guests attended the Gala, emceed by Melissa Sheketoff of Melissa in the Morning on WICC 600 AM. The Gala’s Featured Keynote Speaker was Jim Breheny, the director of the Bronx Zoo and executive vice president of zoos and aquarium for the Wildlife Conservation Society (WCS). His topic for the evening was Zoos and Aquariums in the 21st Century, focusing on animal welfare, animal husbandry and the species survival program.

The event included cocktails, musical entertainment, a seated dinner, live and silent auctions, and visits by animal ambassadors from the Zoo, including a Gyrfalcon that made a dramatic entrance by flying over the stage to open the evening’s festivities.

“Connecticut’s Beardsley Zoo is home to important species protection work. I’m delighted that so many members of the community recognized that the Zoo is truly a jewel in Fairfield County and came out to support its work,” said Committee Co-Chair Sonja Narcisse.

“This was the third annual in-person gala, with a fourth already planned for 2023,” added Committee Co-Chair Claudette Kunkes.

“We were so fortunate to be able to draw on the very talented Melissa Sheketoff to conduct the event and Jim Breheny to speak to our guests,” said Zoo Director

Gregg Dancho. “We owe both of them our gratitude for making the evening a success.”

“Our mission is helped in a very large way by the many sponsors who stepped forward to help support this event. We also thank our Co-Chairs Claudette Kunkes and Sonja Narcisse, committee members, board members, our guests, staff, and volunteers,” Dancho added.