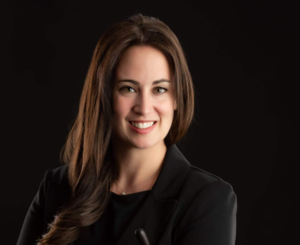 After a smashing “First Turn” performance by conductor-candidate Benjamin Hochman on November 12, the Greater Bridgeport Symphony will present the third of four candidates to succeed the renowned Eric Jacobsen, who has led GBS with great artistry since 2013.

Conductor Chelsea Gallo will take the podium for the “Second Turn” on Saturday, December 17 at 8:00pm at The Klein Memorial Auditorium in Bridgeport with a joyous evening of music sure to warm the heart.

The December 17 concert will be filled with holiday spirit, both Classical and popular.  The major pieces on the bill are both by the great Russian composer Tchaikovsky, excerpts from “The Nutcracker,” a Christmas classic, and his “Symphony #5.”  In addition, GBS will play Leroy Anderson’s “Christmas Festival” and the music of the Tom Hanks Christmas movie, The Polar Express.  Other surprises are also in store, including some singalong music.  And GBS will be continuing their food drive to benefit their neighbors at the Bridgeport Rescue Mission.  Please bring canned or non-perishable food items to the December 17 concert.

“The search for a new Music Director is daunting, on two fronts,” says Executive Director Mark Halstead.  “First, finding anyone to fill Eric Jacobsen’s shoes is a tall order.  Add to that, four fantastic candidates, each of whom brings something very special for GBS.  It’s an ‘embarrassment of riches,” for sure!”  Indeed, with two candidates having masterfully conducted GBS season concerts (Hochman in November, and Brazilian conductor Eduardo Leandro in November 2021) and another (Chelsea Tipton II, scheduled for the March 18 concert), GBS will face a difficult choice in selecting the new Music Director/Principal Conductor.

Like the other Conductor-candidates, Ms. Gallo was hand-picked by outgoing Music Director Eric Jacobsen; in fact, she is the Principal Guest Conductor at Jacobsen’s Orlando Philharmonic and will be guest conducting for the Virginia Symphony, also directed by Jacobsen.  This Jacobsen-connection has impressed longtime GBS fans who want the excitement and progress GBS has made under Jacobsen’s baton to continue.