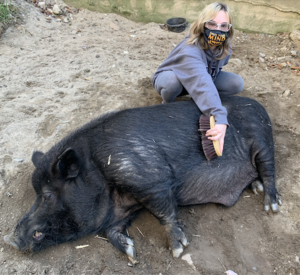 The family at Connecticut’s Beardsley Zoo is saddened to announce the passing of Hamton J. Pig, a 14-year-old male Guinea hog. He was a beloved member of the Zoo family, and a longtime resident of the Farmyard. Hamton passed away from causes related to his advanced age, with his longtime animal caretakers beside him.

Guinea Hogs are a threatened heritage livestock breed, a traditional breed raised before the days of industrial agriculture, representing decades of history in the United States. At one time almost completely extinct, today Guinea Hogs have made a resurgence, thanks to breeding efforts to save heritage livestock. Hamton carried essential traits for survival and self-sufficiency, including foraging ability, longevity, ability to mate naturally, and resistance to diseases and parasites. He fathered several offspring that now reside throughout the country, an important part of the work to repopulate the breed.

Hamton was a registered member of the American Guinea Hog Association (AGHA) and his photo is on The Livestock Conservancy items (mugs, shirts, hats, etc). https://www.cafepress.com/albcstore.1379046267

“Hamton will be deeply missed by all of us here at Connecticut’s Beardsley Zoo,” said Zoo Director Gregg Dancho. “He represented a true American breed.”

The Zoo’s Farmyard recently welcomed three Guinea hog piglets, one of which is a descendant of Hamton. The Farmyard showcases heritage breed animals like the Guinea hogs, domestic species that are in danger of disappearing from the landscape. Heritage breeds were originally bred for small family farms but are no longer commonly found. Rare farm animals represent an irreplaceable piece of earth’s biodiversity, just like their wild cousins, and offer variety that may be needed in the future: robust health, mothering instincts, foraging, and the ability to thrive in a changing climate.

A heritage hog breed, the Guinea Hog is a small, black breed of swine that is unique to the United States. Also known as the Pineywoods Guinea, Guinea Forest Hog, Acorn Eater, and Yard Pig, the breed was once the most numerous pig breed found on homesteads in the Southeast. The Guinea Hog became rare as the habitat of the homestead hog disappeared. Since the 1980s, the breed has enjoyed a new resurgence on small farms and modern homesteads. They grow to a height of 21-24 inches and weigh 150-300 lbs. They have an advanced sense of taste and can quickly identify objects by tasting them. They are quick learners and have a substantial memory.