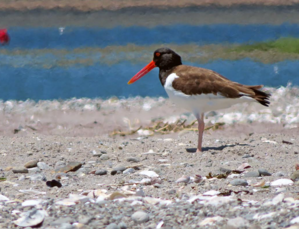 Birdwatchers and photographers can enjoy close access to a federally protected haven for resident and migratory species during two special Birding Cruises offered in early April by The Maritime Aquarium at Norwalk.

The cruises will take participants out near the Norwalk islands of Long Island Sound to seek close access to osprey, oystercatchers, loons, mergansers, long-tailed ducks, egrets and other waterfowl.

“Early April is a great time to go birding on the Sound because that’s when we can see an overlap of migrating species,” said Nicki Rosenfeld, a senior education manager who also is one of the Aquarium’s boat captains. “Some birds that winter here haven’t left but others that migrate out for the winter will have started to return. Witnessing this diversity builds a great appreciation for the importance of Long Island Sound as a vital habitat for so many animals.”

A portion of the Norwalk islands chain is protected as part of the Stewart B. McKinney National Wildlife Refuge, a collection of coastal areas in Connecticut that provide important resting, feeding and nesting habitat for many species of wading birds, waterfowl, songbirds and shorebirds. One of the islands, Chimon Island, is known to have supported as many as 1,200 breeding pairs of herons, egrets and ibises.

Participants are encouraged to bring cameras and their own binoculars.

Cruises occur aboard The Maritime Aquarium’s R/V Spirit of the Sound, a 64-foot catamaran that runs quietly as the country’s first hybrid-electric research vessel.

“By running silently and offering two deck levels for viewing, she’s a great platform for observing the natural sights out on Long Island Sound and along the Norwalk islands,” Rosenfeld said. “The Birding Cruises will be a bonanza for birdwatchers and photographers, giving them safe and proper access to an offshore resource during a program intentionally created for their interests.”

Cost of each Birding Cruise is $31 ($27 for Aquarium members). Space is limited so advance reservations are strongly recommended.

Passengers must be at least 42 inches tall. Guests under 18 must be accompanied by a parent or guardian.