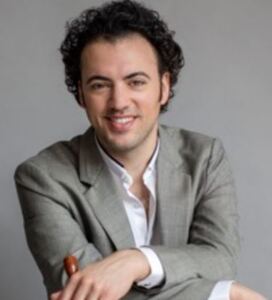 Today, The Greater Bridgeport Symphony has announced its exciting 77th season, appropriately themed Turn, Turn, Turn.  Following the 77th season, the GBS will say goodbye (for now) to beloved music director/conductor Eric Jacobsen who will be stepping down from his role in April 2023, his ninth glorious season with the GBS. He will help usher in a new chapter in GBS’ storied history when he kicks off season 77 on September 10, 2022 with Jacobsen’s Ninth at The Klein in Bridgeport, CT.

"I am so thankful for my time at GBS and so proud and grateful that we have been able to build something truly special together,” says Jacobsen.  “Both the musicians and the Board have come together in such a beautiful way creating such special music at the highest level. From being able to perform with incredible soloists like Gil Shaham and Yuja Wang, to be able to record and make beautiful compelling videos with Simone Porter, Kayhan Kalhor and my brother Colin Jacobsen, I am so proud at how all these projects have been warmly embraced by our community, Board, audience members, and musicians. I'll be forever grateful and changed to have created these musical memories with this wonderful organization. I look forward to returning again and reuniting with the musicians, community, Board, and audience members - with all of whom I feel so closely connected."

“Eric has brought great gifts to our symphony since 2014,” says Mark Halstead, GBS Executive Director. “He remains actively involved in planning his final season and assisting us to find a new conductor who can continue the work he’s been doing with us.  We are sad to see him go but happy for him in his new endeavors.”  GBS President Christine Kudravy adds, “While it’s going to be hard saying goodbye to Eric next year, we know he’ll still be a part of our GBS family and will return as guest conductor in the future.  We’re excited for our new chapter thanks to his selection of new candidates.”

Jacobsen will conduct the last shows of the 76th season July 8 and 9 when the GBS orchestra and dance come together as never before with this extraordinary presentation of Holst’s “The Planets” suite.   Jacobsen brings you, the audience, on the stage to join our musicians and the Dance Heginbotham troupe. The unique shows will be presented with intimate audiences (150 people maximum) with four shows.

Although he is leaving, Jacobsen has vetted three exciting candidates, Benjamin Hochman, Chelsea Gallo, and Chelsea Tipton II, to succeed him as GBS’ Music Director. They will each have a “turn” conducting concerts throughout the season.

Jacobsen will conduct the first (and last concert of the 77th season) beginning  September 10, 2022 with Jacobsen’s Ninth, honoring the beginning of his ninth season as Music Director.  The show will feature Dvořák’s “Symphony No. 8”paired with Rachmaninoff’s “Rhapsody on a Theme of Paganini.”  The “Symphony No. 8” has been called Dvořák’s happiest and most optimistic; combining this with the passion of the Paganini variations, GBS will open its season with great joy.

Turn, Turn, Turn continues, allowing each guest conductor having a turn working with the orchestra and conducting for the home audience.   The First Turn on November 12, 2022 will showcase conductor / pianist Benjamin Hochman who will play Beethoven’s “Piano Concerto No. 1” while conducting.  The concert will also present a modern piece and conclude with Schumann’s uplifting “Symphony No. 2.” December 17, 202 at The Klein will see the Second Turn with conductor Chelsea Gallo – a night of Tchaikovsky’s best.  She will lead the concert with beloved excerpts from The Nutcracker Suite then move through an emotional journey from fate to triumph with Tchaikovsky’s “Fifth Symphony” – and there will be plenty of holiday cheer, too.  The Third Turn on March 18, 2023 will bring a familiar face to the podium, Chelsea Tipton II, who has conducted two popular outdoor concerts for GBS during the pandemic months.  Tipton, known locally as pops conductor for the New Haven Symphony, will conduct the Brahms “Double Concerto” for violin and cello (with soloist Sterling Elliott), and close with Beethoven’s powerful “Seventh Symphony.”

Finally, on April 8, 2023, GBS will wish Godspeed, Eric Jacobsen! as he conducts Rachmaninoff’s “Symphonic Dances,” plus a concerto yet to be determined, which he promises will be “very special.”  The night will be a tribute to Jacobsen, at which it is hoped the new conductor will be announced.

GBS musicians will participate in the search process, as will the audience, through surveys and focus groups at the end of each show.

All five concerts will be both live at The Klein Memorial Auditorium in Bridgeport, Saturday evenings at 8:00pm and be available to watch at home. Season subscriptions, discounted 15-10%, are now on sale at www.GBS.org or by calling (203)576-0263.  Subscriber seats from pre-pandemic seasons are still reserved.