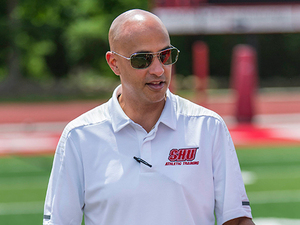 While the COVID-19 pandemic changed the way college athletics functions, no department was more affected than the athletic training staff. Head athletic trainer, Leo Katsetos, guided the Sacred Heart University athletics department through uncertain times and was recently recognized by the National Athletic Training Association (NATA) as its Division I Head Athletic Trainer of the Year.

Katsetos was selected as the year's top head athletic trainer from nearly 350 Division I programs in the country.

“It is very humbling and I am extremely honored and grateful to be receiving this award especially after a year where there were several athletic trainers across the country that went above and beyond and qualified to win this award,” Katsetos said. “But I would be remiss if I accepted this award without mentioning my team of athletic trainers here at SHU, now and over the years. Without them I wouldn’t be in a position to be nominated for this award.”

Each year the NATA Intercollegiate Council for Sports Medicine recognizes one individual for exceptional performance as a head athletic trainer in each of the following collegiate divisions: NCAA DI, NCAA DII, NCAA DIII, NAIA, Junior College/Community College and Club, Intramural, and Recreational Sports. Award recipients are actively involved in their community or campus, athletic training associations and promotion of the profession. Last year’s winner was Jonathan Dana from New Hampshire.

“Always the consummate professional, Leo is such an asset to this athletics department,” said Judy Ann Riccio, SHU’s interim director of athletics. “He led his staff during the most difficult of circumstances, navigating the pandemic and truly keeping the department afloat during COVID times. It is so wonderful to see Leo being recognized publicly with this national honor.”

In addition to overseeing the prevention, evaluation, rehabilitation and treatment of athletic injuries for over 1,000 student-athletes in 33 varsity sports, Katsetos is the sport administrator for the SHU dance team. He also oversees a staff of 12 certified athletic trainers.

This past year, the department's NCAA athletics health care administrator served on the Northeast Conference’s COVID-19 Medical Advisory Committee and the SHU Coronavirus Planning Team. In those roles, Katsetos helped develop the policies and implementation for testing student-athletes as well as the return to play guidelines. Katsetos and his staff were recognized for their extraordinary work with the department’s Chip Kennedy Outstanding Contribution Award.

The NATA award is among the numerous accolades Katsetos has collected during his career. In 2020, he earned the SHU College of Health Professions Clinical Preceptor of the Year Award as well as the Connecticut National Multiple Sclerosis (MS) Society Volunteer Excellence Award. Katsetos works extensively with the MS Society and has served as an ambassador as well as the National MS Society spokesperson in 2006. In 2008, he received the Connecticut Athletic Trainers Association Athletic Trainer of the Year Award.