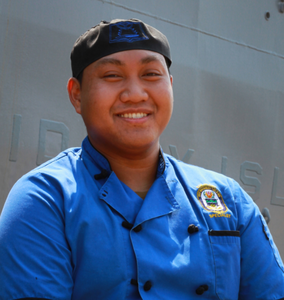 “Where I am from, you either become a statistic or you make something of yourself,” said Kingsidaphone. “I didn’t want to become a static, so I decided to leave and choose the military to get my foot in the door for better career opportunities to better myself and help my family in the future.”
According to Kingsidaphone, the values required to succeed in the military are similar to those found in Bridgeport.

“My family and friends helped me shape the person that I am today by giving me sound advice,” said Kingsidaphone. “By their actions and how they presented themselves in helping others by asking no favors no return, I really took that in and added that to my everyday life. I wanted to pay it forward. Growing up, my parents growing up helped me become independent, and seeing them work hard for me made me want to do the same.”

Whidbey Island is designed to deliver Marines and their equipment in support of amphibious operations including landings via Landing Craft, Air Cushion (LCAC), conventional landing craft and helicopters, onto hostile shores.

Homeported in Little Creek, Virginia, Whidbey Island is longer than two football fields at 610 feet. The ship is 84 feet wide and weighs more than 16,000 tons. It has four diesel engines that can push the ship through the water in excess of 25 mph.

Serving in the Navy means Kingsidaphone is part of a world that is taking on new importance in America’s focus on rebuilding military readiness, strengthening alliances and reforming business practices in support of the National Defense Strategy.

“We ensure that our seas are protected and we defend our freedoms and democracies at home,” said Kingsidaphone.

With more than 90 percent of all trade traveling by sea, and 95 percent of the world’s international phone and internet traffic carried through fiber optic cables lying on the ocean floor, Navy officials continue to emphasize that the prosperity and security of the United States is directly linked to a strong and ready Navy.

As a member of the U.S. Navy, Kingsidaphone as well as other sailors, know they are a part of a service tradition providing unforgettable experiences through leadership development, world affairs and humanitarian assistance. Their efforts will have a lasting effect around the globe and for generations of sailors who will follow.

“It means challenging myself to be independent and learning new skills and having new experiences,” added Kingsidaphone. “It’s about meeting new people and making connections that will help me lead a  progressive life. Not only does it make both my family and friends proud but I feel like I'm starting a family tradition, not a typical path. Other family members have learned a trade but I’ve opened up a door to new opportunities. I am being a role model to my cousin, who said he joined the Army because of me.”