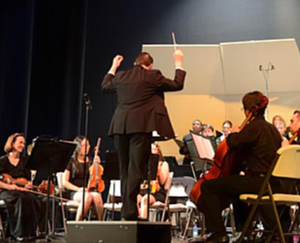 Bridgeport, CT - The Greater Bridgeport Symphony featuring Conductor Eric Jacobsen and an orchestra of 55 musicians will play Dvorak “From the New World” along with a discussion led by Jacobsen. For students and faculty only, at Bassick High School, 1181 Fairfield Ave, Bridgeport, on October 14 from 1-1:40pm.

This is an annual cycle of High School full-scale concerts that GBS has been doing in Bridgeport since 2017, interrupted for two years by Covid.  Last year, GBS distributed concert videos which were used by the music teachers at Harding and Central high schools.

This year, GBS will give free tickets to students and their families who want to see GBS’ 76th season opening show, titled The Spirit Of ’76, on Saturday, Oct. 16 at the Klein in Bridgeport. GBS wants to make sure that kids who want to be there can be there and share it with their families.

The Greater Bridgeport Symphony (GBS) returns to The Klein in Bridgeport, CT for the first time since the pandemic began on Saturday, October 16 at 8:00pm for its appropriately themed Spirit of 76 honoring both the orchestra’s 76th season and the American-related music in its program.

Conductor Eric Jacobsen is back for his eighth season. Pianist Andrew Armstrong, a favorite of local audiences, will perform Rachmaninoff’s “Piano Concerto No. 1", which debuted in its finished form in Philadelphia in 1917. The October program brings back two compositions cancelled in Spring 2020 because of the pandemic: Dvorak’s “Symphony No. 9", “From the New World", which reflects the influence of American song and music on the Czech composer, and Gershwin’s rousing “An American in Paris.”  GBS will take this show on the road, performing Dvorak for students at Bridgeport’s Bassick High School on October 14.

Jacobsen will conduct three of the five concerts with the other two to be conducted by exciting up-and-comers: Brazilian-born Eduardo Leandro on November 13 and Israeli conductor Elinor Rufeizen on December 18. “We’ll have five incredible concerts this season, with Dvorak, Rachmaninoff, Gershwin, Beethoven, Mendelssohn, and Bach, and we even have a dance troupe joining us for an onstage appearance in March,” said Jacobsen.

Leandro will make his conducting debut with GBS on Saturday, November 13 at 8:00pm at The Klein and will showcase perhaps the most iconic of all symphonies – Beethoven’s 5th– as well as soloist (and GBS concertmaster) Deborah Wong, who will perform Prokofiev’s “Violin Concerto No. 1."  African American composer Jessie Montgomery’s “Starburst” will round out the program.  Rufeizen’s concert on Saturday December 18 at 8:00pm at The Klein will center around operatic arias that tell stories of bringing people together, with works by Puccini, Rossini, Mozart, Strauss, and Weber.  Mendelssohn’s “Italian Symphony” and, of course, favorites for the holidays – will top off this special evening.

“Something I have hoped to do for years,” is how Jacobsen describes GBS’ offerings in March. “Everything is different about this concert!” says Mark Halstead, GBS’ Executive Director. The orchestra will perform Holst’s “The Planets” with the famous Dance Heginbotham troupe. Groups of about 120 concertgoers will be invited on to the stage at the Mertens Theater at Paier College (formerly the University of Bridgeport) during six performances over three nights. Patrons can choose from either of two shows on Thursday March 10, Friday March 11, or Saturday March 12.  In this intimate setting, the audience will feel part of the music and dance around them. Shows will be at 7:00pm and 8:45pm on each of the three nights, with a reception (at extra cost) between shows. “Our season theme of ‘Coming Together’ is so well-represented here,” says Halstead. “Music and dance will merge right around the audience.”

Finally on Saturday, April 9 at 8:00pm at The Klein, GBS will be joined by the Connecticut Chamber Choir and the Fairfield County Children’s Choir to complete the season. On the eve of Palm Sunday, the ensembles will join for Bach’s “St. John Passion,” one of the most dramatic ecclesiastical works ever composed.  Grand in scale, it tells the tale of Christ’s crucifixion through dramatic chorale music.

GBS unofficially began its 76th season with a bang, performing for 2,500 people at Bridgeport’s newest attraction, the Hartford Healthcare Amphitheater on Labor Day weekend. Their 75th season was anything but idle. Though there were no live indoor concerts in 2020-21, GBS presented a Covid-safe outdoor concert in September 2020 at Trumbull’s Indian Ledge Park. They followed this with a four-concert “eSubscription” season, with recorded full-orchestra concerts made available for in-home viewing all season long. It quickly became a fan favorite with viewers from all over the world, so the GBS is bringing it back again this year. These recorded concerts attracted such top-notch talent such as violinists Mira Wang and Simone Porter, as well as pianist Tiffany Poon. In addition to the eSubscription concert last December, Poon also hosted a livestream event from The Klein, and recorded an album with GBS, which is due out in the spring of 2022.

The videos created for the 2020-21 season were made available free-of-charge to the Bridgeport public schools and have already been used in music programs there. The videos will also allow residents of eldercare facilities, shut-in by the pandemic, to have great music come to them.  This new video capability, made necessary by the pandemic, will continue this season to bring music to young and old, who otherwise would not have access to it.

Ticket pricing remains the same as in recent years but now, the ticketing fees are now included in the list prices, which range in five levels from $85 to $255 for the full season, and from $18 to $65 for single tickets, available at www.GBS.org.  Patrons subscribing for a full season may request a complimentary eSubscription – all five concerts available for home viewing – with issue dates three weeks after the concerts.  Halstead explains, “We want to respond to those who may be uncomfortable with large public settings. The eSubscription gives patrons the flexibility to enjoy our music in their homes, while allowing our musicians an outlet for their tremendous talents and spreading our music as far as we can.”