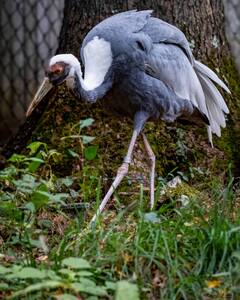 Some birds are born famous, some achieve fame, and some have fame thrust upon ‘em. Cora, a white-naped crane chick who arrived at Connecticut’s Beardsley Zoo from the Bronx Zoo in January 2020, always had fame in her future.

Hatched at the Bronx Zoo in 2020, Cora’s story from birth was filmed as part of a segment for the fifth season of Animal Planet’s THE ZOO, the series which showcases the hard work and heartwarming moments of daily life at the Bronx Zoo and its sister parks across New York City. When Cora was selected to be a companion for Connecticut’s Beardsley Zoo’s male crane McDuffy, her transfer was arranged with a film crew by her side.

Her arrival as a seven-month-old crane with juvenile plumage went smoothly, and due to her age, her full introduction to the Zoo’s male crane was delayed until summer, 2021. Today guests can see both white-naped cranes in the large grassy habitat next to the red pandas.

Click here to watch a clip of a teaser for Saturday’s show.

Zoo Director Gregg Dancho said, “Cora is a beautiful new addition and contributes to the Zoo’s demonstration of the rich biodiversity in nature. We continually look for new and unusual species to educate and delight our guests that also meet our mission of wildlife conservation.”

There are an estimated 5,000 white-naped cranes living in the wild, and the species is listed as vulnerable by the International Union for Conservation of Nature (IUCN).

White-naped cranes are an elegant species native to northern Mongolia, southern Siberia, Korea, Japan, and central China.  They have a white nape and vertical gray stripes on their necks, as well as a distinct red patch surrounding their eyes. They are found in in grassy marshes, wet sedge meadows and reedbeds in broad river valleys, lake depressions and boggy upland wetlands. They prefer areas where their nests can be concealed and there is little grazing pressure.

Habitat destruction of wetlands due to agricultural expansion, as well as hunting, pose the most critical threat to their survival. Since 1994, AZA institutions have been sending surplus White-naped crane eggs to Russia to be reared and released to the wild. Currently, the International Crane Foundation is also involved in the conservation of White-naped cranes throughout their range in eastern Asia.