Details
Published on Thursday, 02 September 2021 18:57
Written by Office of the Governor. 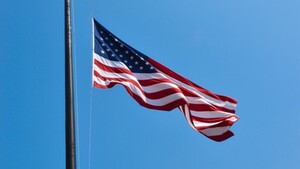 Governor Ned Lamont today announced that he is directing U.S. and state flags in Connecticut lowered to half-staff in honor of Connecticut State Police Sergeant Brian Mohl, who died this morning while responding to severe flooding from the remnants of Hurricane Ida as the storm made its way through the state. Sergeant Mohl served with the Connecticut State Police for 26 years and was assigned to Troop L in Litchfield.

Flags shall be lowered immediately and remain lowered until sunset on the date of interment, which has not yet been determined. The Office of the Governor will send out a notification when flags should be returned to full staff. Accordingly, since no flag should fly higher than the U.S. flag, all other flags, including state, municipal, corporate, or otherwise, should also be lowered during this same duration of time.

“The passing of Sergeant Brian Mohl is a shock and a tragedy, and I am incredibly saddened by his loss,” Governor Lamont said. “He dedicated his career and his life to public safety and protecting the lives of others. His tragic loss is a reminder of the dangers that State Troopers and first responders put themselves in every day when responding to emergencies, and they deserve our utmost respect. Sergeant Mohl served the people of Connecticut with honor and commitment, and for that he will have our eternal gratitude and respect. My heart goes out to his family, friends, and colleagues at the Connecticut State Police, and I ask the people of Connecticut to keep him in their prayers.”

“This is just heartbreaking news, and I mourn for his family, loved ones, and the members of the Connecticut State Police,” Lt. Governor Susan Bysiewicz said. “Sergeant Mohl dedicated his life and career to the great task of serving our community and state. May his bravery and courage long be remembered, and may his memory be a blessing for all who knew him.”