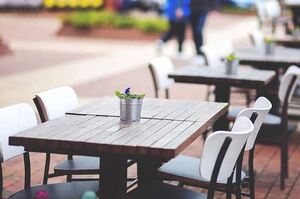 Governor Ned Lamont today announced that he has signed into law legislation (House Bill 5271) allowing the relaxed rules on outdoor dining at restaurants that he established in response to the initial outbreak of the COVID-19 pandemic to continue for at least another 13 months.

The relaxed rules were created by the governor in early 2020 through an executive order he issued using his emergency authority as a way of increasing the ability of restaurants to serve their customers more safely by expanding their outdoor footprints. In early 2021, that executive order was codified into state statutes and extended for several more months by the Connecticut General Assembly through Special Act 21-3, however that law is scheduled to expire on March 31, 2022.

This latest extension the governor signed will last until April 30, 2023.

Relaxing the rules on outdoor dining has enabled many restaurants across Connecticut to safely serve their customers and support their continued operations during the pandemic,” Governor Lamont said. “So many restaurants are locally owned, small businesses, and this is one way we can help in their economic recovery.”