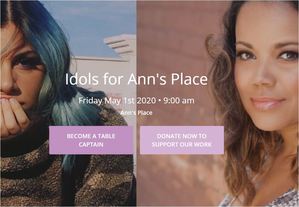 Attendees will be encouraged to donate to Ann’s Place during this virtual event and will be given the opportunity to fundraise for Ann’s Place if they choose to do so. Donations can also be made by texting annsplace to 56651.

Ann’s Place is a compassionate nonprofit serving Connecticut and Hudson Valley New York with professional counseling, support groups, wellness activities and educational resources.  Thousands of people facing cancer come to Ann’s Place for support, all at no charge. In 2019, Ann’s Place provided free cancer support to over 1,300 clients and their loved ones.

Kimberley Locke rose to stardom when she came in third place in the second season of American Idol. Upon exiting the competition, Kimberley released her megahit single, “8th World Wonder,” and became a very successful recording artist, releasing three full-length albums. Among her many achievements - she’s had eight Top 20 Adult Contemporary hits and four #1 Dance hits across various Billboard charts. Her #1 club hit, a remake of the Freda Payne classic “Band of Gold,” was included on Billboard’s “Top 50 Dance Songs of the Decade” list. She’s also made history as being the only recording artist to score a #1 Christmas song on the Billboard Adult Contemporary chart three years in a row. In addition to becoming a successful singer, songwriter and record producer, Kimberley is co-host of the Dr & the Diva television show and great friend to Ann’s Place.

Jaclyn Cole Miskanic, better known by her stage name Jax, is an American singer-songwriter from East Brunswick, New Jersey who finished in third place on Season 14 of American Idol. On August 8, 2016, Jax revealed she is battling Hashimoto's disease, a condition where the body's immune system attacks the thyroid. She said that she had her thyroid removed in April after finding that 12 out of 18 tumors discovered on her thyroid were cancerous. The tumors were all removed successfully, and she is now undergoing iodine treatments. Jax is excited to be part of Idols for Ann’s Place!

For further details, visit www.idolsforannsplace.org or email This email address is being protected from spambots. You need JavaScript enabled to view it.