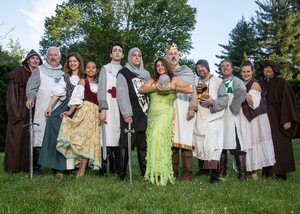 Musicals at Richter (MAR), celebrating 35 seasons as the longest-running outdoor theater in Connecticut, kicks off its main stage season with “Monty Python’s Spamalot,” the uproariously funny musical based on the classic film comedy “Monty Python and the Holy Grail,” playing June 28 to July 13. Staged on the grounds of the Richter House Arts Center, 100 Aunt Hack Road, in Danbury, performances take place outdoors under the stars Friday through Sunday evenings, with additional specially discounted performances on Thursday July 4 and 11.

“Lovingly ripped off” from the beloved 1975 Monty Python film, “Spamalot” retells the legend of King Arthur and his Knights of the Round Table, and features a bevy of beautiful show girls, not to mention cows, killer rabbits, and French people. The 2005 Broadway production, which featured Tim Curry as King Arthur, Sara Ramirez as the Lady of the Lake, Hank Azaria as Sir Lancelot and David Hyde Pierce as Sir Robin, won three Tony Awards, including Best Musical, and was followed by two successful West End runs. With book and lyrics by the legendary Eric Idle and music by Idle and John Du Prez, the outrageous and gloriously entertaining story of King Arthur and his singing and dancing knights will delight audiences as they search for the Holy Grail and “always look on the bright side of life.”

Joining Arthur and Patsy as loyal Knights of the Round Table are accomplished performers Bob Filipowich (Fairfield) as Robin, Tom Denihan (Naugatuck) as Lancelot and Daniel Satter (Trumbull) as Galahad.  Rob Mayette (Ridgefield), last seen as Bert Healey and others in “Annie” and Elle’s Father in “Legally Blonde,” portrays Bedevere.

Mary Cantoni (Watertown) plays The Lady of the Lake, a mystical enchantress and formidable diva. A veteran of numerous area stages, Cantoni recently starred in critically acclaimed productions of the one-woman show “One Night with Fanny Brice” in Connecticut and New York.  Twenty-five years ago, Cantoni portrayed the fiery Aldonza in “Man of La Mancha” at Richter.

Director and choreographer Shannon-Courtney Denihan last performed on the MAR stage as Fanny Brice in “Funny Girl” in 2009. As an award-winning choreographer and director, Denihan’s work has been seen throughout Connecticut, New York and beyond.  Recent directing credits include “The Laramie Project” at Community Theatre at Woodbury (CTAW) and local productions of “Into the Woods,” “Footloose,” “Seussical Jr.,” “Elf,” “The Wizard of Oz” and “Godspell.” Denihan is the director/drama advisor for Nonnewaug High School drama club and teaches dance locally. A graduate of the WCSU theater program, she holds a BA in Communications, Theater Arts and Vocal Performance.

Sharing music directing duties for “Spamalot” are Tracey Marble (Trumbull) and Claire Simard (Ridgefield). Marble was last seen at MAR as The Witch in 2016’s “Into the Woods.”  A veteran actress and singer, she is on the voice faculty of the Musical Theater Division of Hartt School of Music.  Simard, who will also conduct the “Spamalot” orchestra, is the Head of Music and Theater at the Wooster School in Danbury.  She made her Richter debut last summer as Grace Farrell in “Annie” and has numerous musical theater and opera roles to her credit.

For tickets and further information, visit the website at www.musicalsatrichter.org, leave a message at 203-748-6873 or e-mail This email address is being protected from spambots. You need JavaScript enabled to view it. .