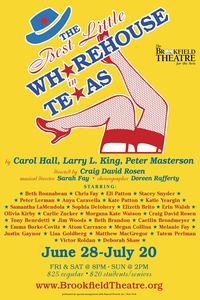 For Sheriff Ed Earl Dodd and other Texas politicians “pressing the flesh” is more than happily engaging voters. It’s also visiting the girls at the Chicken Ranch, the town’s most notable – and some say – popular attraction. In this rollicking, good-hearted show, Brookfield Theatre celebrates the summer season with a musical that Broadway critics called “utterly charming, lively and genial” and as spirited as the Texas two-step.

“Best Little Whorehouse” is choreographed by former Academy of Dance Arts owner Doreen Rafferty with musical direction by Sarah Fay. The show runs through Saturday, July 20th with performances on Friday and Saturday at 8 pm. There are three Sunday matinees at 2pm on June 30th and July 7th and 14th. The free preview performance for area senior citizens will be held on Thursday, June 27th at 8 pm.
Tickets are $25 for adults or $20 for students and seniors. They may be purchased at the box office or online at www.brookfieldtheatre.org.  “Y’all come back now, y’hear!”