Come on Down to the Best Little Whorehouse in Texas 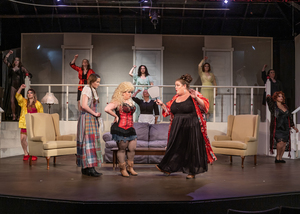 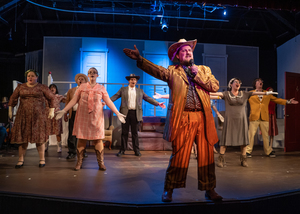 The moment you entered Brookfield Theater, the music, being played by one of the characters in costume, set the scene for an evening of pure entertainment.

A combination or seasoned and rookie performers transformed a barn in Brookfield to a “house of ill repute” in Texas. From the lively, well-choreographed opening that had the audience clappin’, hootin’ and hollerin’, to the spot-on costuming, the almost sold out crowd were engaged the moment the curtain went up. With the actors using the entrances and exits in the back of the theater, the audience felt like they too were sitting in the parlor of the famous “Chicken Ranch.”

Over the next 2 ½ hours, the story unfolded. A few of the cast member stood out for their wonderful performance. I could keep my eyes off Shy (Katie Yeargin) as she transformed from an awkward farm girl to one of the “girls”. Angel (Katie Patton) found a noteworthy balance between the hard world worn exterior and gentle caring inside. The same duplicity was seen in Jewel (Stacey Snyder) who was the quiet maid and house caretaker who became a sexy, Aretha Franklin like seductress during her rendition of “Twenty-Four Hours of Lovin’”.  While Miss Mona (Beth Bonnabeau) held the cast and the  show together with an effortless professionalism and emotionally poignant portrayal.

It is always wonderful to see minor characters also rise to a level of greatness. You couldn’t help but notice Doatsy Mae (Anya Caravallo) with a beautiful voice and sweetness, the Governor (Peter Lerman) whose bumbling nature was endearing, and of course the church ladies with their prudish facial expressions and unyielding support of Melvin T. Thorpe (Eli Patton). Mr. Patton used his dynamic voice and TV evangelist’s personality to try to win the audience over to his claim even going as far as shaking hands with viewers like a residential candidate.

The set designer and crew worked seamlessly in the small space to create new scenes with minimal disruption to the story. Even the actors got involved dancing on and off the stage while moving props. We moving from Mona’s, to city hall to the diner and back again quickly which added to the magic behind the show.

The show is directed by Craig David who not only directs the show, but also takes on the role of Mayor Rufus Poindexter. The musical direction was put together by Sara Fay and choreography including a fancy, toe tapping tap number was the work of Doreen Rafferty. The supporting cast included: Tony Benedetti, Jim Woods, Beth Brandon, Caetlin Broadmeyer, Emma Burke-Covitz, Atom Carrasco, Megan Collina, Melanie Fay, Justin Gaynor, Matthew MacGregor, Tatem Perlman, and Deborah Shaw. The Best Little Whorehouse in Texas in a great place to spend a summer evening. So, break out your boots, dust off your cowboy hat,  and head to Brookfield to whoop it up with this fun cast. The show will run until July 20. Contact www.brookfieldtheatre.org for tickets and information.